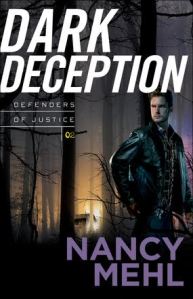 Kate O’Brien has been leading a quiet life in small-town Shelter Cove, Arkansas, for the past four years when her past suddenly comes roaring back to life. Four years ago, she and her twin sister were attacked by an elusive serial killer. Only Kate survived, and it was her drawing of the attacker–along with some last-minute evidence–that convicted the suspect.

She’s been in witness protection ever since, but new evidence suggests the convicted man isn’t the murderer and she’s been subpoenaed to testify in the new trial. Nervous about the risk, she’ll only agree if the same marshal who protected her during the original trial escorts her to St. Louis.

Deputy U.S. Marshal Tony DeLuca accepts the assignment to bring Kate to the trial, remembering how her strength impressed him. While in Shelter Cove, however, he gets a call from his chief, advising them to stay in Shelter Cove until a new development in the case can be straightened out. But when Kate’s safety is threatened, Tony must race against the clock to keep her alive and put this ugly case to rest before anyone else gets killed.

There’s nothing quite like a good serial killer story, you know? Well, yes, I know not everyone will agree with that assessment but I happen to like such things, whatever that night say about me or my reading taste 😉 Moving right along, Dark Deception has an extra added attraction, the white-knuckle effect of knowing said serial killer is out to get you, unlike being the usual random target.

Kate is a really likeable woman with the intent to do good but she also is intelligent enough to recognize danger and want to avoid it plus she’s willing to accept help when she needs it, especially from the marshal who looked after her the first time. For his part, Tony remembers Kate and her strengths and accepts his assignment most willingly. The two have a connection from the past and there’s more of that this time around but not so much as to overwhelm the core story.

In a way, the premise here is a little lacking, at least for me. The excitement of a serial killer kind of fizzles when the guy who’s after the heroine may not actually be a serial killer, just a run-of-the-mill wrongfully convicted guy out for revenge. On the other hand, that does mean Tony’s going to have to figure out the truth and I did appreciate that this element makes Dark Deception more intense than many romantic suspense novels.

Lots of twists and turns keep things moving at a good clip and I really enjoyed spending time with Kate and Tony. It’s been a while since I read anything by Nancy Mehl but that’s my mistake, one I plan to rectify ASAP 🙂

Nancy Mehl is the author of twenty-three books, including the Road to Kingdom, Finding Sanctuary, and Defenders of Justice series. She is a Carol Award finalist and writes from her home in Missouri, where she lives with her husband, Norman, and their Puggle, Watson.

To enter the drawing for a print copy
of Dark Deception, leave a comment
below. The winning name will
be drawn Thursday evening, June 15th.
Open to residents of the US and Canada.