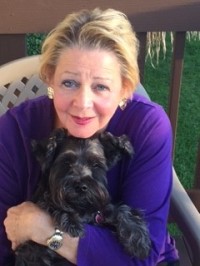 Colleen Mooney was born and lived much of her live in New Orleans before a job moved her to other cities.  She writes a cozy mystery series she refers to as Murder Light that is set in New Orleans. It’s called The New Orleans Go Cup Chronicles and the third book, Drive Thru Murder, was released in early April.

Since January 2017 Colleen organized a Sisters In Crime chapter in New Orleans, has been elected President and has a planned a Mystery Writers’ Conference for June.  She is currently working on her 4th book in the Brandy Alexander series.  She is also the Director of a breed rescue group for almost fifteen years and placed over 300 unwanted or abandoned Schnauzers. In her free time, Colleen sails, goes to a lot of parades, festivals and lives with her husband and three schnauzers in New Orleans.

Feel free to email/contact at one of the following:

Going to other cities made me realize how different New Orleans really is.  In Alabama I ordered two po-boys, one dressed and the other with nothing on it.  The counter person responded, I have no idea what you’re talking about.  Translation:  I wanted two sandwiches on French bread, one with lettuce and tomato and one without lettuce and tomato.

In New Jersey, my friends were ready to leave a bar but I had half my drink left.  I looked around and not spotting any plastic cups I asked the bartender for a go cup.  He looked at me and said, “Lady, where are you from?”  I responded, “How do you know I’m not from here?” The bartender filled me in on the “open container law” I had never heard of.  It was the snowball effect from here. I stumbled and fumbled many times in many places expecting to say or do things I routinely did back home only to discover either no one ever heard of what I was talking about or they laughed hysterically at me.

I have the bartender in New Jersey, who was the first to enlighten me and not laugh, to thank for the idea of a mystery series in New Orleans. I decided to call it The New Orleans Go Cup Chronicles.

A few years ago New Orleans caught up with the rest of the country and we now have an open container law.  Have no fear, if there is a law here there is a way around it. The workaround is for the server at the Drive Thru Daiquiri shop (and yes, we still have a Drive Thru Daiquiri Shop), to hand us our order with a plastic lid on the daiquiri and a straw.  We are served in a closed container and have to put the straw through the “x” in the plastic top ourselves! The person with the daiquiri only has to remove the straw if pulled over.

Voila! Open container law, drive thru daiquiri shop and patron drinking the daiquiri in a vehicle (hopefully not driving) all in compliance.

I write about a lot of things we do in New Orleans that are unique and make us different. I hadn’t realized how different we were until I lived other places.  There’s always something to do here between weekend events, festivals, parties, and just friends wanting to get together to have fun.  The hardest thing to do here is deciding what to attend and which ones you just can’t squeeze into the weekend or the day or the night. Our biggest challenge here is deciding what to go to because there is always two or three things going on at any one time.  After I decide where to go and what to do, I need to decide what to write about.

4 thoughts on “You Can Go Home Again”