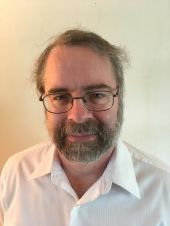 Marc Vun Kannon, after surviving his teen age years, entered Hofstra University. Five years later, he exited with a BA in philosophy and a wife. He still has both, but the wife is more useful. Since then he almost accumulated a PhD in philosophy and has acquired a second BA in Computer Science. After dabbling in fulfilling pursuits such as stock boy and gas station attendant, he found his spiritual home as a software support engineer, for CAMP Systems International.

Marc puts his degrees in Philosophy and Computer Science to good use writing stories about strange things that happen to ordinary people. His wife and three children think it’s harmless enough, and it keeps him out of trouble. As a philosopher (his first novel demanded he write it while he was in Graduate School), his main interest is in the characters, and as a Computer geek his technique is to follow the character’s and story’s logic to ‘grow’ a story organically. His main rule when writing is to not do again what he’s already seen done before, resulting in books that are hard to describe.

There are those who will say, and have said, that a story is only as good as its villain, that a hero is only as interesting as the villain he opposes. The villain, in a sense, drives the plot, striving to work his nefarious will upon a hapless world, while the hero, strangely, is the guy who reacts to this attack, in defense of Mom and apple pie. The hero only gets center stage because the villain is hiding behind the cloak of mystery, until his fell designs are accomplished.

Like most of my stories, Ghostkiller grew as I was writing it, starting from a very small seed, or two, or more, and becoming something I never imagined when I started out. (Did I mention that I’m a pantser?) One of those seeds was an idea I got from a movie, in which a man is hypnotized, but as he’s going under, the hypnotist has a heart attack, and no one thinks to bring the subject out of his trance. Being who I am (Offbeat-Stories-R-Us), I thought of a sorcerer conjuring up a demon, and dying as he did so, smudging the pentagram and leaving the evil spirit trapped in this world with no body to inhabit and no way to get back where it belonged.

That idea was at the base of Ghostkiller, the soil, the fertilizer, but the story-logic vine that grew from that soil was very different from its source material. While my main and only guiding principle as an author is “if you’ve seen it done once, don’t do it again”, and I certainly wouldn’t shrink away from the idea of writing a novel with a hellspawn as the hero (except that I’ve seen it done already), Ghostkiller did not start there. Aside from the first line, inspired by a Disney cartoon cross-pollinated with a zombie novel, I have no idea how the story of Ghostkiller got to be what it is:

“John Smith, killer of ghosts and savior of souls. Person of interest in a murder investigation, involuntary monster-hunter when the corpse gets up and walks away. When the body becomes a vessel for a spirit of unspeakable evil, John finds himself at ground zero of the end of the world. Not a question of if, or of when, just how.”

Instead, with the idea of the dead sorcerer buried at its base, Ghostkiller created for itself not a plot, but a story structure that I spent years trying to understand and that I’ve never seen anywhere else, a structure I call ‘Villain by Proxy’. The villain starts his evil machinations going and then somehow vanishes from the scene, leaving all the other characters stuck in a situation (‘the Sitch’, if you will) they aren’t even aware of, his evil proxy. Unlike another story structure I developed, which I called the Hero by Proxy, the Sitch acts in the world, performing whatever villainous acts its creator made it for. (As an illustration of this, imagine the story of the Lord of the Rings, only without Sauron, just the One Ring, endlessly waiting and corrupting all who hold it.) 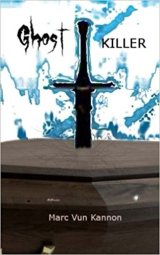 The Sitch drives most of the actions of the plot, from both the protagonists and their opposites, a Jack the Giant-Killer scenario with no Jack. Even the bad guys are victims. The majority of the plot is them–all of them, any of them–figuring this out, and then doing something about it, no matter the price, and there will be a price. The Sitch is the state of the world itself. When the situation is the enemy, defeating the enemy means the end of the world.