The ancient slave mongers who killed the adults
and enslaved the children have angered a more
advanced species of aliens. Composed of pure
energy, this superior race has attacked the Anunnaki
home world and is now setting a course for Earth.

The energy-based aliens believe in a system of trial
by battle. They seek to push Shane and his friends into
the arena with the ones who killed their parents. The
results will determine if humans deserve to live, or if
they should be made extinct as well. It’s up to Shane
to keep his friends—and an army of kids who look up
to him—alive. They’ll be fighting not just for their own
lives, but for the fate of the entire human race. Can the
enemy of Shane’s enemy be his friend, or is this just
another species determined to exploit and destroy them?

A Few Words from the Author

If all the adults suddenly were wiped from the face of the planet, would law and order be a thing of the past, or would the children create their own? My opinion, the children would eventually create their own new version of law and order. The systems that are in place today are there because of a functioning infrastructure. If all the adults are gone, that infrastructure will fail. In my opinion, there will be initial chaos, then groups of children will start to conglomerate. Some groups will be bad and some good. Some of the kids will try to find ways to shelter and feed themselves by farming, hunting, fishing, etc. Others will make their living by stealing from those good children. At first, justice will be swift, frequently violent and without trial. As those that are determined to rebuild by making honest livings settled into their new lifestyles, I believe they’d make militias to protect their families and food. Next they’d create tribunals and hold some sort of court for criminals. Like in the in the Wild West, some of these new justice forces would inevitably become corrupt. Over time, I believe the children would thrive and society would be reborn. But I’m a bit of an optimist (my stories may not always seem to reflect that.) J 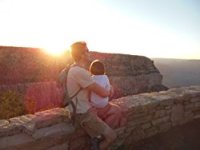 Born at the end of the Vietnam war and raised on a horse farm near small town north Georgia, his imagination evolved under the swaying pines surrounding his family’s log home. On summer days that were too hot, winter days that were too cold, and every night into the wee morning hours, he read books. He lives in sunny southern California with his beautiful wife and two perfect children.
Author links:
Website // Twitter // Facebook // Goodreads