Before she let her writing go to the dogs, Susan J. Kroupa won awards for her fiction from such places as the Utah Arts Council Contest, Writers of the Future and the Deep South Writing Competition. Her stories have appeared in Realms of Fantasy and in a variety of anthologies, including Bruce Coville’s Shapeshifters. Her non-fiction publications include features about environmental issues and Hopi Indian culture for The Arizona Republic, High Country News, American Forests, and the Bristol Herald-Courier.

Now, she is best known for her Doodlebugged Mysteries, a gentle cozy series featuring the irrepressible but obedience-impaired sniffer-dog, Doodle.

Susan lives in the Blue Ridge Mountains in Southwestern Virginia with her husband and a trouble-prone labradoodle whose superpower is bringing home dead possums. You can learn more about her on her webpage http://www.susankroupa.com or by subscribing to her newsletter (where you can sometimes get free stories and other cool stuff) at http://eepurl.com/3PUR1.

Okay, I’ll admit it. I didn’t invent Doodle, the wise-cracking, bed-bug-detecting narrator of the Doodlebugged mysteries, out of whole cloth—or, um fur. It happens that many of Doodle’s more eccentric traits came from observation of Shadow, a labradoodle we adopted as a filthy, flea-bitten puppy on a frigid November afternoon in 2008. Abandoning all the wise advice in “how-to-get-a dog” books, we impulsively came home with a pup we knew little about because we had a chance to get him for free.

I had wanted a labradoodle ever since I first began reading about Australian labradoodles a few years earlier, but knew I could never afford one. Back then, when I first started gazing adoringly at photos of labradoodle puppies, the breed, or rather hybrid, wasn’t as easy to find as it is today, where often unscrupulous or at least sketchy practices by amateur breeders hoping to make a quick buck on the breed-mix du jour—aussiedoodles, goldendoodles, schnauserdoodle (schnoodles), etc.—have flooded the market and sometimes the animal shelters with “designer dogs” of unproven health histories and personality traits.

But the first designer dogs came out of a practical desire to create non-shedding and mostly hypoallergenic service dogs.  Developed by Wally Cochran (beginning in 1989) Australian Labrador retrievers (generally calmer and smaller than American Labrador retrievers) were crossed with standard poodles. These dogs were designed to be service dogs for people who are allergic to golden retrievers, German shepherds and other typical service breeds. The goal was to pair a non-shedding, more hypoallergenic coat (i.e., a poodle’s coat) with a service-dog personality (i.e. a  Labrador retriever’s.)

At this point, you might say, “Hey, poodles already have hypoallergenic, non-shedding coat. Why go to all the trouble to create a hybrid?”

Because poodles, with their quick intelligence and their sense of what I can only call entitlement are not always the most biddable dogs. Biddable, in dog training terms, means compliant, tractable, easily led or taught. While some poodles can be biddable, many are more independent than the breeds most often used as service dogs.

So the Labrador part of the labradoodle equation was to make the breed more user-friendly. The Mac version rather than the PC. Or the PC version rather than the Linux, depending upon your software biases. That’s what Wally Cochran was looking for in 1989 when he began crossing the two breeds in search of a hypoallergenic service dog. (Cochran has stated in recent years that he now regrets starting the whole designer-dog trend. “There are a lot of unhealthy and abandoned dogs out there,” he said in 2014, referring to all puppy mills spawned by the designer dog craze.) 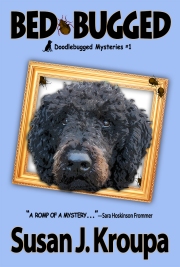 I got the clever and cute part in my labradoodle bundle. Calm? Let’s just say that during the first two years of his life our nicknames for Shadow included “the barkster,” “boing-boing,” “hyper-drive,” “motor-mouth” and, well, you get the idea. And as for biddable? Excuse me while I wipe the tears of laughter from my eyes. I think if he could have talked during our training sessions, his most-spoken phrases would have been, “Why should I do that?” Or, “Make it worth my while.” Or “Are you crazy?” Certainly his eyes often seemed to say such things.

As one of Doodle’s trainers complains in the first book, Doodle, (and certainly his inspiration, Shadow) is “too much doodle and not enough labra.”

It was during those first few years, which were interesting in the Chinese curse sort of sense, that the idea of creating a mystery series narrated by an obedience-impaired, service-dog flunkee was born. Doodle was the obvious name for such a dog, and he needed what service-dog trainers often euphemistically call a “career change.” But to what? The short answer is that I decided to make him a bed-bug detecting dog. (Why I picked bed bugs, which have a deservedly high “ew” factor, is a tale for another blog.)

The result turned out to be the Doodlebugged mysteries, aimed at fans of gentle mysteries and dog lovers of all ages. Best-selling author Virginia Smith (The Goose Creek Series) has called the books “the perfect blend of mystery, suspense, and laugh-out-loud doggy observations.”

You can learn more about Doodle and Shadow by subscribing to my newsletter:  http://eepurl.com/3PUR1 or visiting my webpage at https://www.susankroupa.com. No spam, I promise, just occasional updates, and all newsletter subscribers can get a free copy of my story about a fiercely loyal black & tan hound, “Gabriel & Mr. Death.”

Or, see what he’s up to in Ruff-Housed, where stolen dogs, animal rights activists, and a big demonstration by the White House make Doodle wonder if he’s bitten off more than he can chew. On Amazon ◊ Barnes & Noble ◊ iTunes ◊ Kobo