Kathleen Delaney, author of Murder Half-Baked and other books, retired from real estate to pursue writing full time. She’s here today to talk about how dogs and holidays have wormed their way into her Mary McGill series.

Murder by Syllabub, fifth in the Ellen McKenzie series, is available in bookstores now. Purebred Dead, the first in the new Mary McGill series, was released in August 2015 and Curtains for Miss Plym was released in April 2016. Blood Red, White and Blue will be out in July 2017.

I wanted to write about a woman in her seventies, but one who wasn’t ready to sit down and be old. Mary McGill has a lot to offer, and she knows what to do with it. She’s smart, she knows everyone in town, she’s organized and can keep others on track (as a retired school teacher she’s had plenty of practice) and she has time on her hands. She’s a widow with a willingness to help wherever needed and she doesn’t let a little thing like age get in her way. Santa Louisa, Ca has come to rely on her when they have a fundraiser or community event they want to go smoothly. None of them had counted on murder. 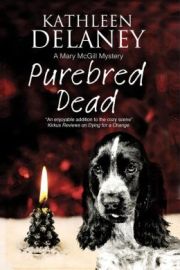 What I hadn’t counted on, or in the beginning even realized, was all three of the Mary McGill mysteries features a holiday. Purebred Dead takes place over Christmas. It opens during the Santa Louisa Victorian Extravaganza, where many of the houses in the old downtown have pageants of some sort on their front lawns and people from miles around come to see the show. This year is the first to have a Posada, the Mexican celebration of Mary and Joseph looking for a room in the Inn and ending with Mary giving birth in a barn. Only this church manger is filled not with baby Jesus but a very dead old veterinarian, a puppy cowering beside him. I know why I invented the Victorian Extravaganza. The town I used to live in had a Christmas event much like it and I’d thought for years it would make a great murder scene, but where the puppy came from I don’t know. It just appeared and I had the dickens of a time trying to figure out why it was there and how it fit into the story, which much to my surprise centered not only on Christmas but dog breeding.

So, now I had a Christmas book filled with dogs. Besides the puppy, Mary finds a cocker spaniel, Millie, whose owner has been murdered. Feeling sorry for the little thing, she offers to take care of her for a few days. The few days extends into forever much to Mary, Millie’s and my delight. The puppy and Millie aren’t the only dogs that show up in this story and I never planned any of them.

In Curtains for Miss Plym, Millie discovers the body of little old Miss Plym behind the makeshift dressing room curtain at the spring rummage sale, the one held right before Easter week starts. I hadn’t thought about Easter when I set the rummage sale in the spring but of course it had to be postponed and I needed a new date.  It turned out I had to fit it into the Easter church schedule. However, the new date worked out fine. Neither Mary nor I minded working around the smaller children having their own Easter egg hunt on the church lawn and absolutely loved the three legged hound dog that didn’t get a home when the dog and cat adoption event was canceled along with the rummage sale. I gave him to Santa Louisa’s chief of police. I hadn’t planned any of this, don’t know how it happened, but Mary finally figured who the murderer was, although she and Millie almost didn’t live to tell about it, and Morgan loves living with the police chief.

I’d always planned to set the 3rd book, Blood Red, White and Blue, during the 4th of July. I thought shooting someone while the fireworks were going off worked really well. It wasn’t until I was half way through the book I realized I had created a series where every book was set during holidays. By now I was fully aware the dogs had taken over.  So, poor Mr. Miller got shot in the back during the 4th of July fireworks display and his German Shepherd, Ranger, became homeless. Mary couldn’t let that condition continue, after all Ranger was a friend of Millie’s. Besides, she’s found out Mr. Miller was a state policeman and she’s afraid his murder might be somehow connected to the bizarre jewelry store robberies going on up and down the state. Could that mean someone in her town… she has to find out. With the help of the dogs, she gets her answer but it creates more fireworks then she and the dogs ever thought possible.

In case you didn’t know, writers of novels fall into two categories. There are those who outline, plan meticulously, and know what’s going to happen before they put fingers to computer keys. Then there are the rest of us. We start out with an idea, usually vague, and some characters. Sometimes they’re vague as well but if you develop a series you have the advantage of already knowing your key character and some of her/his friends. Then you start writing and odd things happen.  Like books about holidays, dogs and murder. Writing this way is nerve wracking, it means waking up at three in the morning, trying to figure out what happens next, it  means going back and rewriting because things haven’t turned out the way you thought, but it’s also an adventure. You never know where your pen, or computer key board, will take you, or your characters, but it’s always interesting and often quite a surprise. Come visit Mary and Millie and their friends in Santa Louisa. I hope you have as much fun reading about them as I have had writing their story.