The war created nearly insoluble housing problems in Seattle, so when Betty MacDonald remarried during it, she and her new husband, Don, were unable to find anything suitable. They turned to the small islands within commuting distance, but tours of these islands turned up little available housing, at least of the suitable variety, until they found the perfect house on Vashon. Now all they had to do was learn to cope with island life.

Back in the Dark Ages when I was young, probably about 15, I saw an old movie called “The Egg and I” and fell in love with the story and the characters. As it happens, the only person in that movie that’s in Onions in the Stew is Betty MacDonald; the children weren’t born yet and Betty was with her first husband rather than the fella in this book. Claudette Colbert and Fred MacMurray were delightful and I still have very fond memories of that movie today. Oddly, as long ago as that was, it’s Claudette Colbert’s voice I remember so that caused me a bit of a problem when I started listening to this audio book.

Never mind. It wasn’t long at all before Heather Henderson became Betty MacDonald to my ear and I came to really appreciate her narration and, most of all, her ability to create individual voices for the many characters. Among my favorites are Anne and Joan, Betty’s teenaged daughters, and the woman whose name I don’t recall that managed the peach farm.

Ms. MacDonald didn’t write a lot of books before she died of cancer in her late 40’s but those few are masterpieces of humor. We seem to think that “snark” is a modern invention but this author mastered that kind of funniness all those years ago and we’re the better for it. I hooted at the passages dealing with her daughters’ adolescence and her tale of picking peaches for a few dollars a day left me smiling but full of admiration for this woman who was always willing to do whatever needed doing. Life on an island in the 1940’s with war restrictions and lack of services had to be difficult but Betty took it as an adventure, the best way to look life in the eye and thumb your nose at it.

I have only one quibble—I now know more, much more, about clams than I ever wanted to. By the time this part was over, I’d heard about every kind of clam there is, how to dig for each kind found on the island, the special difficulties of finding and capturing the prized geoduck (there’s a hilarious treatise on this clam here), how to pronounce geoduck (not what you might think), how to keep clams ready for cooking, how to cook them and a handful of recipes. Enough with the clams 😉

My only wish regarding Betty MacDonald is that we had someone like her writing today. 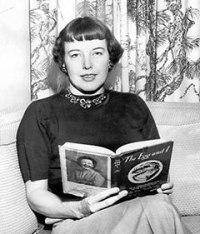 Betty Bard MacDonald (1907–1958), the best-selling author of The Egg and I and the classic Mrs. Piggle-Wiggle children’s books, burst onto the literary scene shortly after the end of World War II. Readers embraced her memoir of her years as a young bride operating a chicken ranch on Washington’s Olympic Peninsula, and The Egg and I sold its first million copies in less than a year. The public was drawn to MacDonald’s vivacity, her offbeat humor, and her irreverent take on life. In 1947, the book was made into a movie starring Fred MacMurray and Claudette Colbert, and spawned a series of films featuring MacDonald’s Ma and Pa Kettle characters.

MacDonald followed up the success of The Egg and I with the creation of Mrs. Piggle-Wiggle, a magical woman who cures children of their bad habits, and with three additional memoirs: The Plague and I (chronicling her time in a tuberculosis sanitarium just outside Seattle), Anybody Can Do Anything (recounting her madcap attempts to find work during the Great Depression), and Onions in the Stew (about her life raising two teenage daughters on Vashon Island).

Author Paula Becker was granted full access to Betty MacDonald’s archives, including materials never before seen by any researcher. Looking for Betty MacDonald, the first official biography of this endearing Northwest storyteller, reveals the story behind the memoirs and the difference between the real Betty MacDonald and her literary persona. 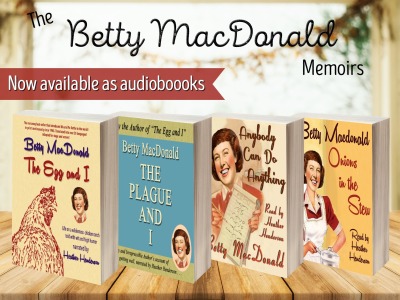 Heather Henderson is a voice actress and audiobook narrator with a 20-year career in literary and performing arts.  Her narrations include the NYT bestseller (now also a feature film) Brain on Fire;  and Sharon Creech’s The Boy on the Porch, which won her an Earphones award and was named one of the Best Children’s Audiobooks for 2013 by Audiofile Magazine.   She earned her Doctor of Fine Arts degree at the Yale School of Drama, and is co-curator of AudioEloquence.com, a pronunciation research site for the audiobook industry.  In 2015, Heather was a finalist for a Voice Arts Award (Outstanding Narration, Audiobook Classics), for her narration of Betty MacDonald’s The Egg and I.

2 thoughts on “Book Review: Onions in the Stew by Betty MacDonald”