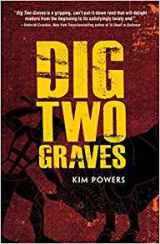 Skip Holt’s world as she knew it ended the day her mother died in a car crash [always bringing to her mind a poem she had had to learn in school by Robert Frost].  There is much erudition here, as Skip’s father makes his living “by teaching about the past, the very long ago past.  The Classics, Greece, Rome, Latin.”   Indeed, the novel begins with a quote from Confucius:  “Before you embark on a journey of revenge, dig two graves.”  And revenge is what this book is all about.  “The classics were all about it – – getting revenge, declaring enemies, going to war.”

From the publisher:  In his 20’s, Ethan Holt won the Decathlon at the Olympics and was jokingly nicknamed “Hercules;” now, in his late 30’s, he’s returned to his ivy-covered alma mater to teach, and to raise his young daughter Skip as a single father.  After a hushed-up scandal over his Olympics win and the death of his wife in a car accident five years ago, Ethan wants nothing more than to forget his past. Skip is not only the light of Ethan’s life – – she is his life. Then, Skip is kidnapped.  A series of bizarre ransom demands start coming in that stretch Ethan’s athletic prowess to its limits, and he realizes with growing horror that they are modern versions of the Twelve Labors of Hercules, demanded in tricky, rhyming clues by someone who seems to have followed every step of Ethan’s career.  To solve the mystery and get his daughter back, Ethan teams up with a force-of-nature female detective, Aretha Mizell, who carries some secrets of her own.  As Ethan races from Labor to Labor, we enter the mysterious abandoned schoolhouse where Skip is being held captive, and we begin to hear the fantastic and strangely heartbreaking story of the kidnapper and his link to Ethan’s past. The clues begin to point not only to Ethan’s athletic career, but to his childhood, and to a family history as troubled and bizarre as those of any
of the legendary, mythic character he teaches.

The novel opens on a late Fall day in New England, the day Ethan turns 39 and receives tenure at the college where he teaches, and where Skip, now 13, has planned a party for him.  Suddenly things take a decidedly ugly [well, uglier] turn, one as to which the reader has been given a hint, with a glimpse of a stalker, “the man with a plan,” and things escalate beyond anything the reader might expect.  The writing is riveting, with one shocking turn at Chapter 31, and the identity of the kidnapper not known until Chapter 55, with the book ending on a somewhat enigmatic note 50 pages later.  A page-turner of a book, it is highly recommended.