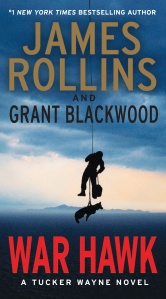 Tucker Wayne’s past and present collide when a former army colleague comes to him for help. She’s on the run from brutal assassins hunting her and her son. To keep them safe, Tucker must discover who killed a brilliant young idealist-a crime that leads back to the most powerful figures in the U.S. government.

From the haunted swamplands of the deep South to the beachheads of a savage civil war in Trinidad, Tucker and his beloved war dog, Kane, must work together to discover the truth behind a mystery that dates back to World War II, involving the genius of a young code-breaker, Alan Turing…

They will be forced to break the law, expose national secrets, and risk everything to stop a madman determined to control the future of modern warfare for his own diabolical ends. But can Tucker and Kane withstand a force so indomitable that it threatens our future?

I’ve loved practically everything I’ve read by James Rollins because he makes it all such an adventure but I have to admit that I don’t read all his books. Why? Because they’re massive and my zeal for really long books has diminished over the years. The other thing that makes me hesitate is that he sometimes collaborates with other writers, much like James Patterson does, and that can be dicey. On the other hand, I read a lot of reviews of the first book in this series and saw very little to alarm me so I decided to take the plunge with War Hawk, all 544 pages of it (which is a mere 372 pages in the epub edition, another reason I love ebooks).

It’s hard to think of a braver, more self-disciplined pair than a former Army Ranger and a war dog but Tucker’s goal at the beginning of this novel is to simply enjoy life on the road with Kane at his side. He still has money in the bank from a job he recently did so employment is not an issue but their trip to Yellowstone is aborted when a woman from their past shows up looking for help. A colleague is missing and others have died, leading her to flee with her young son. Jane Sabatello was important to Tucker in their Army days so he doesn’t hesitate but they certainly don’t anticipate the coming confrontation with a man determined to essentially control the world with secrets from World War II and the brilliant mind of cryptanalyst Alan Turing.

And thus begins a wild, tension-filled adventure that takes us into the world of drones and the wondrous albeit frightening things they can do. I imagine some of this is in Mr. Rollins’ and Mr. Grantwood’s imaginations but much has already come to pass in real life, giving this thriller a validity that’s more than a little unnerving. A bit of imagination (I think) comes into play with Kane’s abilities but I didn’t care about that because Kane is such an appealing dog and a great companion for Tucker. The two of them make a fine team and I think I might have to go back and read the first book.

JAMES ROLLINS is the #1 New York Times bestselling author of international thrillers, translated into more than forty languages. His Sigma series has been lauded as one of the “top crowd pleasers” (New York Times) and one of the “hottest summer reads” (People magazine). In each novel, acclaimed for its originality, Rollins unveils unseen worlds, scientific breakthroughs, and historical secrets–and he does it all at breakneck speed and with stunning insight.

In addition to his New York Times bestselling collaborations with Clive Cussler and Tom Clancy, GRANT BLACKWOOD is the author of three novels featuring Briggs Tanner: The End of Enemies, The Wall of Night, and An Echo of War. A U. S. Navy veteran, Grant spent three years as an Operations Specialist and a Pilot Rescue Swimmer. He lives in Colorado.

To enter the drawing for a print
copy of War Hawk, leave a comment
below. The winning name will be drawn
Thursday evening, February 16th.
Open to residents of the US.