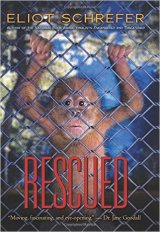 Every child wants a pet at some time or another.  A dog, kitten, pony or orangutan.  Maybe orangutan isn’t typical, but if you grew up watching BJ and the Bear or Every Which Way But Loose, you may see the simian sway.  Whatever the animal, it is almost always up to parents to make the decision.  Children don’t always know what is best.

When John casually notes the potential appeal of ape ownership while watching an old movie, he was not actually asking for a pet.  His dad could dig the draw when he recognized the leading “man” as an orangutan because sometimes the adorable orange creatures would wander around his company’s plant in Indonesia.

In fact, he returned from a business trip bearing a baby-orangutan-in-a-barrel.  John was beside himself with wonder and joy.  His mother was also struck with wonder; but hers was the “in doubt” version, much different than the “filled with admiration, amazement, or awe; marvel” version that burst from her son. John’s wonder won and Raja became the newest member of the family for four rambunctious years.  Until divorce divided them.

The two year separation of John and Raja was torture; for both boy and beast; but paled in comparison to their last days together leading up to their final farewell.   This relationship is written so well, it is as if I actually witnessed it.  The fondness, understanding, patience, support and tolerance between the “brothers” is palpable.  The range of emotions that rocket through John as he blindly battles the hardest decision of his entire life build the ultimate reader’s rollercoaster and recalling that this is a sixteen-year-old-boy, ties a knot and truly tugs the heart-strings.

I thoroughly enjoyed each and every bit of this tiny tome and would be remiss if I did not highly recommend Rescued to those searching for reads.  While the book may  technically tip into the Middle-Grade category (for the 12-year-old and older readers), I have no doubt that there are many Teen-Aged, Young-Adult and Not-So-Young-Adult readers that will love Raja’s story as intensely as I do, and I’m confident that I’m not the only reader to learn a lot from it. 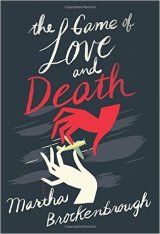 The Game of Love and Death is positively packed with particulars to ponder.  Love is a man, Death a woman. Each chooses a competitor, a term I use loosely; the chosen do not actually compete.  Most people are unaware of the Game, even while participating.  Virtually no rules, a victor is declared; but the win seems superfluous.

Flora, an amazing aviation mechanic, is also a phenomenal pilot, possibly rivaling Amelia Earhart.  It is 1937 and she “has the brown skin, and here in America, (you) pay so very much heed to that.” Besides, she can trick herself into believing that she was meant for something else.  The death of her parents created a void she valiantly tried to fill with the jazz nightclub she inherited.  Flora chose work over a high school diploma, believing “…the club was her future and most white folk were hell-bent on keeping colored folk in their place, even if they were polite about it.”

Henry hasn’t had it easy, but he is a white male.  His dream is simple: eke out a living with his beloved bass.  Instead, he works for the newspaper of his almost-adopted family, often accompanying Ethan on interviews.  When Henry sees Flora working on a plane, it is as if he had been sleep-walking through life and is just now completely awake.

The harrowing story of Flora and Henry in the The Game of Love and Death is enriched by the secondary characters.  Ethan isn’t the golden boy he seems, and his secret struggles would tarnish his image if revealed; although there is nothing to be ashamed of.  Simple spoken statements throughout, “there hasn’t been a white newspaper that’s written about the likes of us unless some sort of arrest was involved,” reiterate bigoted opinions; making the book more than just entertaining to thought-provoking, too.