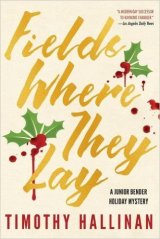 
Junior Bender, burglar extraordinaire and sometime detective to the underworld, serves as the narrator of this unusual Christmas tale.  He is roped in to investigate, on behalf of a Russian mobster and owner of a dying shopping mall in Los Angeles, why there has been a spiking increase in shoplifting in recent months a few days before Christmas Day.  Junior, who hates the Xmas atmosphere, is immersed in the Holiday cheer of shopping, Santas, and piped-in popular songs, much to his chagrin.

While undertaking his task, he becomes involved in a few side ventures, including looking into the death of one of the shopkeepers, witnessing the death of another, and discovering the real problems at the mall, typical of similar establishments fading away all over the nation as shoppers turn to other outlets.  Another involves his burgeoning friendship with one of the two Santas on the premises, helping him to recover a favorite item apparently stolen from his home.  One side benefit, however:  he is able to get his own holiday shopping done despite his procrastination.

This novel probably is the most cerebral in the six-book Junior Bender series, with long passages on the business of shopping malls, their dying days, observations on the Holidays, people in general, and his own life and loves.  In fact, he faces a crisis with his own lover and her reticence to divulge anything of her past.  On the whole, Junior solves a unique problem in his typical fashion, with ingenuity.

This is an excellent series, and one that continues to be recommended.

2 thoughts on “Book Review: Fields Where They Lay by Timothy Hallinan”