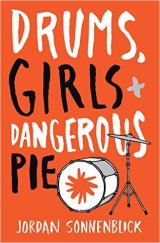 Inexplicably unique, Steven’s story sucked me in, seeped into my soul and stole my heart.  Mr. Sonnenblick aptly captures and conveys the perplexities of a 13-year-old boy—the obvious, an abundant use of “like” in his dialogue, but also the subtle, self-sacrificing inner voice rarely credited to teens.  This outwardly awkward adolescent is more than a pounding prodigy on a drum kit and all-around funny guy; he’s an older brother.

Even at a blush, he is kind, tolerant and indulgent with the feisty five-year-old boy who gleefully dismisses his elder sibling’s ‘rules’.  When said spunky boy slips from the kitchen stool and is rushed to the emergency room, Steven simply sighs, “So Jeffrey was getting me in trouble again, as usual.”  How could he know then, that the tumble terminated ‘as usual’?   Steven’s little brother has cancer.

A terrifyingly tough topic, tackled brilliantly.  Financial strain, even with good insurance and steady income; parents putting life on hold, sick siblings sent away for safety….but also….life goes on.  That struggle seems insurmountable yet it’s unavoidable.  A viscous diagnosis, grim parade of prodding and poking, a family flung in different directions would wreak havoc on anyone; the impact it has on a teen is unimaginable.

Was unimaginable. Not now.  Mr. Sonnenblick wrote this book in 12 short weeks.  It wasn’t planned, hadn’t stewed somewhere in his head for years.  It was impulsive and imperative.  While teaching 8th grade, he discovered that one of his students was going through something even more challenging than middle school.  Her younger sibling had cancer.  Needing to help and knowing that a good book could; he searched for just the right one to share; did not find it.  There was no choice.  He wrote it.  And it is everything. All of the best things, defiantly in spite of almost-the-worst-thing, Steven and Jeffrey’s should be shared.