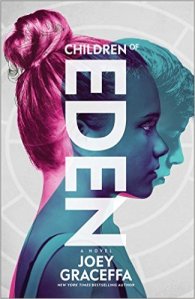 Rowan is a Second Child in a world where population control measures make her an outlaw, marked for death. She can never go to school, make friends, or get the eye implants that will mark her as a true member of Eden. Her kaleidoscope eyes will give her away to the ruthless Center government.

Outside of Eden, Earth is poisoned and dead. All animals and most plants have been destroyed by a man-made catastrophe. Long ago, the brilliant scientist Aaron al Baz saved a pocket of civilization by designing the EcoPanopticon, a massive computer program that hijacked all global technology and put it to use preserving the last vestiges of mankind. Humans will wait for thousands of years in Eden until the EcoPan heals the world.

As an illegal Second Child, Rowan has been hidden away in her family’s compound for sixteen years. Now, restless and desperate to see the world, she recklessly escapes for what she swears will be only one night of adventure. Though she finds an exotic world, and even a friend, the night leads to tragedy. Soon Rowan becomes a renegade on the run – unleashing a chain of events that could change the world of Eden forever.

Joey Graceffa is definitely a child of modern times and he’s made an indelible impression on the social media world. It would be easy to dismiss him as just another celebrity thinking he can write a book worth reading but that would be a mistake. Mr. Graceffa can put thoughts and words together quite nicely.

Some have said that dystopian fiction has outlasted its welcome but I still find it intriguing and highly entertaining, engaging my brain as well as providing great stories. Children of Eden is easily one of the better dystopian tales I’ve read for several reasons, not least of which is a very interesting protagonist.

Imagine being 16-year-old Rowan, essentially a prisoner in her own home her entire life. As comforting and welcoming as it is, this is still a prison and her father’s attitude towards her is dismissive, almost as though he resents her existence. When the day comes that Rowan is told she has to leave her safe haven and literally the only three people she knows, her reaction—to run—is natural. Unfortunately, Rowan is not prepared for the outside world and finding other second children, also in hiding, will change her life, as will catastrophic events within her family and a secret she could never have expected.

Along with a cracking good tale and an appealing main character, we find other characters who are perhaps less appealing for various reasons but that actually makes them more interesting. In particular, Lark and Lachlan got my attention with their sort of jealousy of each other with regards to Rowan.

The author’s core theme of ecological disaster is not a new idea but it always bears repeating in our own time of seeming inability to take environmental concerns seriously enough. Could we end up in a future like this one, ruled over by a faction that believes it knows what’s best for society? Of course we could and many of us would find life as chafing as Rowan does.

I do have one personal negative issue with Children of Eden—there’s a humongous cliffhanger which I could do without but such is life, right? I’ll just have to hope the next book is forthcoming sooner rather than later because I really want to know what’s going to happen next. 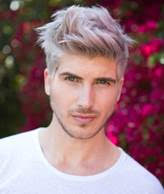 Joey Graceffa is one of the leading content creators and actors on YouTube. His memoir, In Real Life: My Journey to a Pixelated World, was published in 2015 and became an instant New York Times bestseller. Joey ranked third on Variety’s 2015 #Famechangers lists and has been featured in numerous publications such as People, Forbes, Entertainment Weekly, and The Hollywood Reporter.  In 2013, between his daily vlogs and gameplay videos, Joey produced and starred in his own Kickstarter–funded supernatural series, “Storytellers,” for which he won a Streamy Award, and was recently announced for a season 2 in 2016 in partnership with Legendary and Style Haul. In 2016, he debuted “Escape the Night”, a surreality competition series for YouTube Red. Joey is a passionate storyteller and carries that sentiment into all of his projects, now with his latest fictional narrative, Children of Eden. For more information, please visit ChildrenofEdenBook.com.

3 thoughts on “Book Review: Children of Eden by Joey Graceffa”