A fine pastiche that will take its place in the ever-growing libraries of Holmesians around the world. In the persona of Dr. John Watson, the author has crafted an intriguing tale of world journeys, strange and strangely twisted criminal characters and adventures at every turn.

For the most part the author has immersed himself into the very English character of the long-time companion and associate of the iconoclastic Sherlock Holmes. A man whose brilliance and observational talents are second to none, is accurately portrayed in print as a man often given to boorishness and impatience. Here we see him in a somewhat softer portrayal as he entices Dr. Watson to follow him first to the Continent and thence to the central wilds of Africa. It is of course, not yet the Twentieth Century and Holmes is in pursuit of the missing half of a treasure map written in an ancient text, long since lost to the turn of the world.

The adventures and the characters are many and worth pursuing and if we are occasionally jolted forward into the Twenty-first Century, by a peculiar grammatical construction, that only enhances the enjoyment readers will discover. A very worthwhile reading experience, indeed. 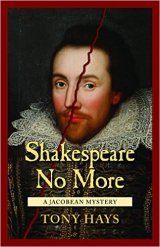 This novel, set during Jacobean times in England, is a worth addition to the growing Shakespearean canon. The narrative purports to be chronicled by a constable in Stratford on Avon in the years following Shakespeare’s retirement from the stage. Shakespeare has returned to the family home and promptly begins to sow discontent and turmoil. It isn’t much talked about but the actor and playwright, though a family man, had a roving eye and didn’t much mind if the woman he pursued was married to someone else. One of the women he pursued is the wife of our narrator, Simon Saddler, wool merchant and town Constable.

When the novel opens, Shakespeare lies dying and he calls Saddler to his side to accuse another or poisoning him. After his death, Constable Saddler, in spite of his distress over his wife’s infidelity, Simon determines to investigate the allegation. This turns out to be a dangerous decision. Political maneuvering in these times was often deadly and the King’s supporters were not reticent about using assassination as a tool.

Readers familiar with this period of English history will recognize some of the characters and scenes deftly built into the story. The novel is well-paced, drawing on a variety of sources to weave this speculative and very enjoyable tale into a carefully grounded narrative. The inclusion of a cast of characters and a good “Author’s Note,” at the end all adds to a positive experience for any reader.