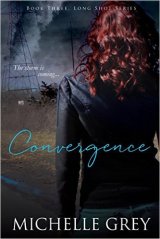 
Whether we call it a romantic suspense or a mystery/romance, the chase is on in Convergence. The plot and characters satisfy detective story lovers and also please readers of romance novels. It’s told from two points of view. Tori Whitlock, the beautiful, hard-nosed tornado chaser isn’t looking for commitment, and Jack Mathis, the hot FBI detective intends only to chase the serial killer threatening Tori’s life. Their worlds collide when the detective must take up residence in Tori’s home to protect her.

Tori has become a celebrity from her electrifying tornado chase videos, and she’s totally upfront about pursuing Jack for a roll in the sack. But she’s also running from demons and ready to lash out with her sharp tongue against the idea of being protected. Jack finds himself drawn to the intelligent, strong-willed lady but won’t let himself act unprofessionally. He’s also still healing from past heartbreak.

The detective fits right in with Tori’s tornado chase team, but he must investigate each member in case the killer of women meteorologists has infiltrated the group. The reader learns how chase teams work while following the increasing fearfulness and also the sexual tension. As soon as we think we don’t know much about the inner Jack or about Tori’s motivations, the author gives us more. Gradually, the characters become rounded until we care as much as they do.

Convergence gives us two main characters, two intertwined plots, and two climaxes (no pun intended). We turn pages to learn whether the serial killer will ever be identified and whether the protagonists will be able to share their feelings with each other. It’s a twisted path, but worth the turns.