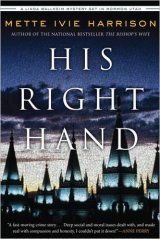 
Set in Draper, Utah, this second novel draws back the curtain on Mormonism ever farther than the author’s first novel, The Bishop’s Wife. We are once again with Linda Walheim, wife of the Bishop of the ward. The Mormon religious structure is elaborate, everyone in the organization has an assigned label depending on their age, their direction and their duties to the community.

Linda’s marriage is suffering small cracks and strains due to the constant pressures placed on her husband, Kurt, even though he has assistants. The ward and the larger community encounters serious turmoil when Wallheim’s main assistant, devout pillar of the community, Carl Ashby, is found dead in the local temple. That it is a crime of passion—murder—becomes apparent and then the community is rocked to its core upon the revelation that Carl Ashby was born a woman. He had been living a lie, married to a devoted woman, the couple had two adopted children, and they were active in the church and community. Yet no one even suspected.

With the police investigation hampered by political maneuvering from church elders, Linda inserts herself into the investigation against the wishes of her husband, her church and even some of her friends. Her ensuing probes reach farther than intended and cause widespread turmoil and danger to others.

The book is written in a blunt, almost naive style that sometimes may lead readers astray. Wallheim’s voice contributes to the confusion at times because she is given to long and occasionally rambling introspection leaving this reader wondering whether she’s absorbed in herself or other members of her community. Still we are drawn to this character whose motivation is always to protect the children, her church, the family and society, and solve the murder.