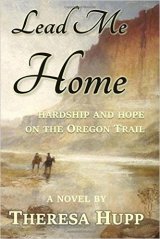 
Have you ever wanted to go back in time and ride in a Conestoga wagon on the Oregon Trail? Here’s your chance. Ms. Hupp has created a setting and characters so realistic that the reader might believe the diary entries she includes in each chapter came from a real traveler. Her research did, in fact, include reading diaries, maps, and first-hand accounts of such journeys.

Not only did I vicariously sweat during the trip across the western deserts, grow nervous about river crossings, feel the dust in my face behind the animals, and mourn the loss of wagon train members, but also I empathized with the emotional ups and downs of the main characters. From the saga’s unsettling beginning when Mac meets Jenny under emotional and tragic circumstances, the tone is set for their ups and downs during the long trek across country. Then, as we get to know them, we learn the inner strengths and sometimes immature decisions that guide the young people through trying situations.

I rooted for the characters when conflicts arose, and I kept turning pages to find out what would happen. Would the bully/discontent cause a fight with the Native Americans and get everyone killed? Would the baby or the mother die during childbirth? Would Mac and Jenny find what they wanted? Now, I’m anxious for the sequel, since I’ve come to care about all of the characters.