I have been in denial for years when people called me a Crazy Cat Lady. But now I look at the proof: disheveled bathrobe, multiple litter boxes, endless kibble runs, cats underfoot. With 13 cats, it’s very possible I’ve lost perspective.

It didn’t start out this way. Many years ago I only had two. Then I moved to a large house in a town that doesn’t believe in spay and neutering. Unacceptable. If I could catch them and tame them, they got fixed. 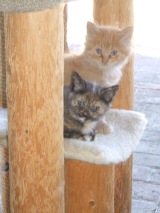 Two multiplied to 6. I still retained control. We had rules in my house and they knew and understood them. Not that they always obeyed them.

I’ve been trying to figure out when the felines got the upper hand. When did I become the opener-of-cans, just a reliable food source? What happened to the cuddles I deserved? I think it was around the time I consented to take two kittens from a friend who was moving. Rusty was a glutton. He trained the next kitten, Cookie, to wake me up by sitting on the bedside table and crying forlornly until I was forced to give up, get up and feed the tribe.

There is an upside to having lots of cats. When friends suggest they come over or spend the night, I smile and say “I have 13 cats. Do you really want to do that? Plus, the cats don’t like strangers in our house.” Which is true; I’ve protectively sheltered them so that they believe I’m the only human on the planet.

I’m not interested in dating and nothing cools romance like an abundance of cats. Nobody wants a Crazy Cat Lady for a girlfriend and I seldom meet men who are likewise crazy. I’ve met exactly one in my life.

Writers and cats go together like whiskers and cream. Hemingway had the six-toed cats in Key West. My two new kittens, Nickie and Max, like to climb on the desk and walk across the keyboard. Gemini figures if I’m sitting, my lap must need company. Kitler simply blocks the computer screen. Do I move her? No, I try to peer around her to see what I’ve written. It they get too obnoxious I throw them out. They haven’t learned how to dial the SPCA or Child Protective Services.

While I’m ignored for three-fourths of the year, come winter and everyone wants to climb in bed with me. Do you know what it’s like to navigate around 7 cats in a queen-sized bed? I don’t dare move because I don’t want to upset them. Kitler has a short temper (calico) and I get smacked if I try to get up to go to the bathroom.

Like any good mother, my heart leaps when I see them peacefully sleeping. And cats are marathon nappers. They spend 3/4 of their lives sleeping, about 16 hours a day. The only mammals that top them are opossums, sloths and bats. When they sleep, they are my angels. Too soon they wake up. 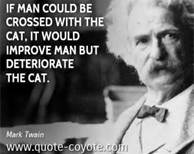