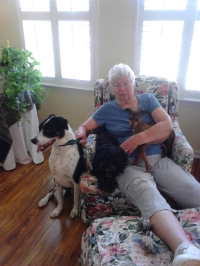 Kathleen with Lefty, Millie and Maggie

Kathleen Delaney, author of Murder Half-Baked and other books, retired from real estate to pursue writing full time. She’s here today to recount the joys of all the wonderful things she’s learned from recreational reading.

Murder by Syllabub, fifth in the Ellen McKenzie series, is available in bookstores now. Purebred Dead, the first in the new Mary McGill series, was released in August 2015 and Curtains for Miss Plym was released in April 2016.

Last night I watched the by now old movie, “Julie and Julia”, for the fourth or fifth time. The first time I watched it with an eight year old and a six year old. I got more out of it last night.

I’ve been a Julia Childs fan for years. My kids grew up on Julia Childs recipes. They got very used to seeing me in the kitchen, dishtowel over my shoulder, Mastering The Art of French Cooking spread out on the counter while I tried to figure out how to properly truss a chicken or dodge bubbling olive oil while I browned stew meat.

My mother was a good cook. I don’t know why, my grandmother was a rotten cook. Mother ran to chicken fried steak (we used to tenderize it with the hammer), meat loaf and fried chicken, dishes we now call comfort food, and she did them well. Her mashed potatoes never had lumps, neither did her gravy and her green vegetables were still green when they made it to the table. My father had grown up on a farm, his mother was a great cook and that was the kind of food he liked. I didn’t know there was any other way to eat until my first trip to France. 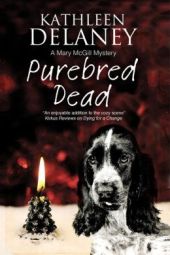 I came home determined to learn how to cook like the French. And then along came Julia.

It seems to me that the knowledge I treasure most I’ve gotten from reading. Recreational reading, not textbooks. And, before you say anything, I know cookbooks aren’t fiction, at least most of them aren’t, but for me, cooking is recreational, and reading cookbooks is just as much fun as the mysteries I was, and still am, addicted to. I learn something new with each new one I buy, even if I don’t try every recipe.

I’ve learned other things from the novels I’ve devoured.  I’ve peeked into the lives of lawyers, doctors, hotel maids, dairy farmers, and I’ve lived through terrible tragedy and experienced wonderful joy with those same people.  I’ve not only learned a lot from those books, but have spent many pleasant hours doing it. But what I didn’t realize was that, just as Julia Childs taught me how to cook, the authors of those books taught me to write.

I’ve learned how to construct a plot, how to get rhythm into a story, how to build that story to a crisis, then back off and build again to a greater one, never letting go of the tension as the story builds. I learned that all action springs out of character, and that characters must stay true to who they are. By that, I mean you can’t make someone a meek little mouse, hiding in a corner, and then suddenly, without warning, turn him or her into a super hero. That kind of thing takes time, in real life as well as in fiction, and that person’s journey out of the corner to super herodom just might be the story. 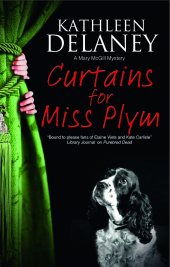 I’ve also read many books on “how to” construct a plot, build characters, keep the story moving, and most of them have been more than helpful, but the people I go back to, time and time again, are the ones who weave those stories you can’t put down, who introduce you to people whose lives you share for two to three hundred pages, and who you don’t want to leave when the last page is finally read. Those are the ones who, like Julia who taught me to take joy in cooking well, are the ones who taught me to take joy in story telling, and who, like Julia, set the bar high. So my most heartfelt thanks to all of them, for the pleasant hours I’ve spent with them, and the pleasant hours I’m spending creating my own characters. And now I must end this, for I’m off to the grocery store, roast chicken sounds pretty good right now, and I think I’ll stop by the library on my way home. Just as soon as I finish writing this next chapter.

Who is working on the 3rd in the Mary McGill canine mysteries, Blood Red White and Blue.