Kait learned to read at the age of two. Had to, her father wouldn’t read her “Prince Valiant” in the Sunday comics. Her two favorite books are still Dr. Seuss’s A Fly Went By and Louisa May Alcott’s Little Women. Dr. Seuss was the first book she remembers reading, and the Alcott introduced her to Jo March, and exclamation points. Both changed her life.

Kait’s working life proved just as varied. A seasonal job selling fine china and glassware in the Washington, DC area soon morphed into a move to New York City and a job with a high-end Italian gold jewelry import company. The call of the tropics took her back to Miami and a job working for one of Miami’s most colorful characters as he and his Dallas Cowboy owning partner developed a national restaurant chain. A stint with the fledgling Miami City Ballet provided more grist for the journals. That led to years working with estate planning law firms and lessons learned in the front lines of litigation. She wrote five novels during this time, honing voice and characterization, learning scene and setting. The books, some masterpieces of head hopping, live under her bed. She loved them all.

Today she’s combined her love of scuba diving with her love of writing to create a new series, the second book releasing this month: Death by Sunken Treasure.

Thank you for having me here. I’ve long been a fan of your blog, and although I don’t often comment, I do select much of my reading material from the posts.

I’m Kait Carson and my books, the Hayden Kent series, and the Catherine Swope series, are based in Florida. My books, your book, his books, her books, and probably a few cat books are set there too. Lately there are a tsunami of books opting for a Florida setting. What is it about the Sunshine State (don’t believe that by the way—it rains half the year) that’s responsible for this sudden influx of books? Back in the day, we had Marjorie Kinnan Rawlings, John D. MacDonald, Carl Hiaasen, and Dave Barry, and of those, only Carl and Dave overlap in writing time. Now, open a book and you can be anywhere from the Florida Keys (guilty) to Sarasota. If water is the theme, why not set in California, the Carolinas, Virginia, even New Jersey. If it’s all about the weather, California, Arizona, and Texas are front and center.

Most of the modern writing set in Florida is in the mystery genre. I have a theory and it has to do with location, location, location. Florida is unique as the only peninsula state, and the southernmost point of the country. So, shake all the eccentrics, miscreants, and wannabes from around the map, stir slightly, tip, and step aside. When you run out of places to run, you’ll probably find yourself in Florida. And there will be plenty of writers waiting to record your story, and help you make it better.

It wasn’t always like this. When I first came to Florida, Miami was Miamah, a sleepy little southern town that closed in the summer. Then Castro came to Cuba. Miami began to pulse with a salsa beat, easy access to South America coupled with too much coastline to protect and an endless number of landing strips carved into the Everglades brought the cocaine cowboys and a different kind of energy filled the State. “Miami Vice” painted us pastel, South Beach took off, and everyone wanted to come to Florida. Florida meant new beginnings. It didn’t matter who you were at home. In the tropics, you are who you say you are. 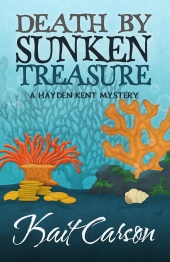 The State is catnip to writers. From the forests of the panhandle where snow does occasionally fall to the steamy streets of Key West where a bad storm can wash you out to sea, Florida is what you need it to be. For me, it’s home, and it’s an integral part of my stories.

Hayden Kent is a scuba diver. In Death by Sunken Treasure, her friend’s son is the victim. Hayden’s scuba skills are tested as she dives the ancient Spanish wreck the man discovered and finds doubloons and motive scattered on the sea floor. Add in an ex-wife seeking to restructure the divorce settlement, two Last Wills signed the same day with different beneficiaries, and a cast of characters that could only live in the Florida Keys and you have a hint of the series of events that could only happen on what the locals call “the Rock.”

Diving, death, doubloons, and duplicity. It doesn’t get more Florida than that.