Returning guest blogger Sunny Frazier, whose first novel in the Christy Bristol Astrology Mysteries, Fools Rush In, received the Best Novel Award from Public Safety Writers Association, is here today with her thoughts on the pitfalls of multi-tasking.

We’ve come to that point in society where we humans are proud of the fact that we can do a dozen different things at once, much like a clown juggling balls. Life expects it; no, requires it. So much to do, so little time. Our schedules are full and it doesn’t look like cloning ourselves is in the near future.

When I worked as a secretary at the Sheriff’s Dept. I was a major multitasker. It was required in order to answer phones while doing warrant checks, reports and handling detectives pestering me. I like to think I was efficient enough to do it all without my work being sub-par.

What is this need to cram as much as possible into our allotted hours? In the race to get everything done we’ve become a nation of stress and high blood pressure. I know people who brag that they read while on their treadmills. My crafty friends knit/crochet while watching TV (one woman even clicks her knitting needles throughout our Sisters-in-Crime meetings). I have friends who try to talk to me while doing dishes. It doesn’t work.

I believe women became adept at multitasking going back to Neanderthal times. Back then when we were hunter/gatherers, men only had to concentrate on killing a mastodon for supper. Meanwhile, women picked berries, watched the kids and kept an eye out for wild dogs. It’s in our DNA.

While not exactly multitasking, here’s how the seventh grade tried to kill my love of reading. Kennedy was in the White House and word got out that he made it through all the daily paperwork by speed reading. Nothing doing but educators decided it was a great idea to fast-track the brightest students by copying his example. Somebody’s 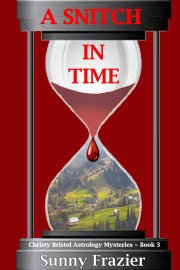 brainchild was a system of color-coded cards, each with a page or two of info on science, history, geography etc. We were required to race through the material, answer a list of questions and advance to harder material. And, we were timed.

Not only was it stressful to be competitively pushed to outrace other students, the joy of learning was lost. There was no time to actually THINK about what we were reading. No chance to savor the info, roll it over in our minds, put it in context with our lives. The experimental program was a failure and quickly discontinued.

I’m retired now. The only multitasking I do is reading magazines during TV commercials. I take my time when I read a book, enjoying the language and craft, mulling over ideas, absorbing information at my own pace. Sometimes I go out in the backyard with a cup of tea and bask in the sunshine and listen to the birds. Now, THAT’S multitasking!