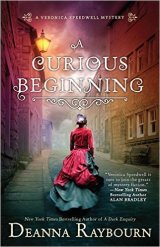 
I didn’t want to leave the world Deanna Raybourn created for this book. Her writing is sumptuous.

It’s 1887 in a small English village. Veronica Speedwell has just buried her aunt, the last of her family. She’s free to return to traveling the world, collecting butterflies for fun and profit. But hours after the funeral, her house is burgled. A stranger approaches her warning of danger and offering help. She is suspicious, but when he says he knew and loved her mother, she can’t just walk away. Veronica was a foundling. She must learn more about him, and her parents.

The stranger leaves her in London, with Stoker, a reclusive naturalist, and a promise of revelations to come. What comes is news of the stranger’s murder. Veronica and Stoker embark on literal and figurative journeys of discovery that involve a surreal circus, kidnapping and old, dangerous secrets. Their relationship begins in mistrust. Veronica is intensely independent, in the vein of the great Victorian women explorers. Stoker is deeply damaged, estranged from family and society. Gradually, as danger tests them over and over, they begun to understand and appreciate each other.

I found their journeys fascinating, the ending satisfactory in several ways. May this be the first of many books about this couple. 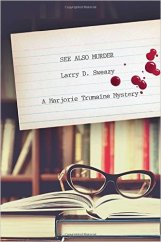 A fascinating idea, an unusual location, an investigator with an interesting profession, and some odd characters all combine into the potential for a truly outstanding mystery novel. Unfortunately, it doesn’t quite come off, due to an occasional wandering focus.

The author has chosen to concentrate on the mental meanderings of the principal character caught up in a tangle of competing emotions and relationships. Marjorie Trumaine is a professional indexer for a big East Coast publisher. Her life revolves around details and accuracy. The publisher sends her galleys of upcoming books and her responsibility is to check and double check facts and the consistency of facts. Publishers are unhappy when reviewers point out that the killer’s red getaway sedan on page five somehow morphs into a green dump truck on page twenty.

Marjorie Trumaine lives quietly in a small North Dakota town where she does her work and goes about life. A neighbor and his wife are butchered and the sheriff discovers a possible clue. It’s an amulet clutched in the hand of the deceased, covered with odd markings. The sheriff hands over the amulet to Marjorie Trumaine in the hopes her investigative skills will provide answers, including who murdered the couple.

Trouble begins almost immediately. Immersed in the investigation, Marjorie begins to see lurking shadows and hears strange noises. People she once saw as friends and good neighbors, she now looks at with tinges of fear and suspicion.

The first person narrative is clean and precise and readers will develop clear images of life in small North Dakota towns late in the previous century. Perhaps too many images. Eventually, of course, Marjorie discovers the truth about the amulet and the murders while adroitly avoiding the killer’s attempt to stop her.

Reviewed by Carl Brookins, September 2015.
http://www.carlbrookins.com http://agora2.blogspot.com
The Case of the Purloined Painting, The Case of the Great Train Robbery, Reunion, Red Sky.