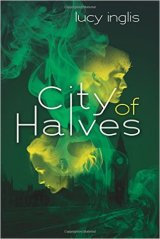 What a way to start your day. Lily who lives with her barrister father in a London suburb, is a pretty proficient computer hacker and is currently helping Dad on a case. She’s looking for a forger whose identity can help free an immigrant woman her father is defending, who is facing imprisonment and deportation. When Lily snags some video footage from one of the ubiquitous surveillance cameras that are all over London, it shows what she thinks is the forger near a spot where he’s dropped papers in the past. She has time to check out the area because school isn’t in session.

When Lily reaches the alley where she saw the footage, she’s attacked by a two-headed dog that nearly kills her. The mystery figure she saw in the video appears, killing the dog and carrying her back to the large building where he lives. Despite her protests, the heavily tattooed boy named Regan, uses an ancient medical book to figure out how to give her an emergency blood transfusion from his own arm. When Lily tries to refuse because she has an extremely rare type, he informs her that she’ll die unless he does and he knows that she’s Type H. She begins to feel better almost immediately. Even more startling is the fact that all of her injuries have completely disappeared even though her clothing is still soaked by her own blood.

Thus begins an extremely well crafted combination fantasy thriller and romance that involves an evil government agency, a host of supernatural creatures (bandogges, dragons, wraiths, banshees, plague carriers, a man whose hands create fire, snake people and others too numerous to list here), lies from the past and threats aplenty to London, some natural, others supernatural.

As Lily and Regan slowly fall for each other, they have to figure out how their relationship fits into an ancient prophecy, avoid her getting captured by the government and learn where the girls and various mythical creatures who are being kidnapped have been stashed as well as for what purpose. None of these are easy, making this book a real page turner. It’s a perfect blend of urban fantasy and romance with mystery elements. While the ending is satisfying, there’s that delicious hint of a sequel in the future. 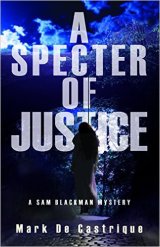 A strong, well-conceived story takes readers into some dark corners of the American judicial system. The concept of “innocent until proven guilty,” serves us well, except when it doesn’t. Criminal defense lawyers are wedded to the idea that they should bend every legal effort to protect their clients and use the system to see their clients go free, even the guilty ones. Should they? Even if they know their client is guilty? What about possible consequences of freeing a violent perpetrator?

Ours is not a perfect system but it is better than any alternative yet devised by the mind of mankind. These are questions raised in this enthralling story of lawyers, investigators and policemen all caught up in a web of deceit, murder and manipulation that has roots more than ten years old.

Sam Blackman and his lover and partner, Nakayla Robertson, join forces with a local group of boosters to create a fund-raiser to help twin orphaned boys. There are murky legends of ghosts, suicides and spectral happenings in Asheville, North Carolina, as there are about most cities. An evening tour of sites with costumed hosts seems innocent enough until the real dead body of one of the fund-raiser participants is abruptly injected into the proceedings.

Thereafter Sam and Nakayla are beset on all sides as they try to decipher obscure and musty clues, helpful and resistant witnesses, old and current case-loads, all told in neat, carefully constructed cleanly delivered prose. This novel is a clean, intense and fast read with some excellent characters and relationships that will leave many thoughtful readers with some difficult questions to ponder. I recommend this novel with no  reservations.

Reviewed by Carl Brookins, October 2015.
http://www.carlbrookins.com http://agora2.blogspot.com
The Case of the Purloined Painting, The Case of the Great Train Robbery, Reunion, Red Sky.