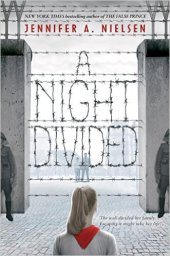 Imagine a couple members of your family go out of town for a night. When darkness descends a fence is erected; enclosing your home, neighbors and half of the city. From the next morning forward, part of your family is on one side of the fence, unequivocally separated from you.

Almost incomprehensible, yet this isn’t the beginning of a dystopian saga. A Night Divided is a heart-breakingly honest retelling of a monumental event experienced by the citizens of Berlin, merely fifty-four years ago. Certainly, most people know “of” The Berlin Wall; albeit in a vague, didn’t-I-hear-about-that-coming-down-David-Hosselhoff-or-something, kind of way. That really doesn’t seem good enough.

In her remarkably ingenious way, Ms. Nielsen took true government oppression and resilient, determined traits of the people to give us vibrant characters against gray, dismal lives. With unprecedented freedom to speak within the pages of this compelling tome; courageous, captivating—yet ordinary, every-day folks–tell their story in a way that will affect everyone.

Introduced as a spunky, outspoken little girl; Gerta grows exponentially, as she relays her years behind the wall in an admirably confident voice. Innocently, and only initially, Gerta watched invasive actions of the police against many of her East Berlin brethren. She puzzled as to why the adults just stood alongside her, also only watching. Frustration and anger quickly overtook her benign curiosity.

Bonding with her beloved older brother, repeatedly witnessing stark, harsh grief as time and again former friends were killed in escape attempts; Gerta learned. And she accepted. There was only one person that could initiate change and there was only one person that she could absolutely, wholly and completely trust. She had only herself. With that resolution, Gerta springs into a fast-paced, harrowing and gripping mission that takes the reader on an emotional roller coaster ride of feels.

As this young girl doggedly follows her heart, her spirit and hope spread to touch others with varying and surprising effects. More than one family’s story, or even one city’s story, A Night Divided is about true friendships, kindness, generosity, sacrifices and regrets. Of course, Ms. Nielsen wrote it, so it also stands that A Night Divided is just an outstanding, enthralling, fun read …. for Middle Graders, High Schoolers, Young Adults as well as Not-So-Young-Adults.

2 thoughts on “Book Review: A Night Divided by Jennifer A. Nielsen”