We came in peace. Lie.
We had no role in the Collapse. Lie.
I have always been honest. Lie.
I never lied to her. Truth.

Reunited with her brother, and surrounded by Flint, Peter
and her new-found grandfather, Jax Mitchell has still never
felt more alone. The choice to follow Rym back to the city to
find answers and see Lir is an easy one, but their reunion is cut
short and Jax is forced to leave Lir behind. She finds herself
traveling with some unexpected companions and heading
back toward a place she’d hoped to never see again.

After being imprisoned—and tortured—on the orders of his
uncle, Lir hasn’t seen daylight or linked to anyone in weeks.
After a lifetime of connection, the pain and loneliness is almost
too much to bear. Elated that Jax actually came, Lir finds renewed
hope and strength to continue fighting his uncle’s influence over
the E’rikon, even when things look hopeless and Lir’s been
branded a traitor by the very people he’s trying to save.

While Jax and Lir fight separate battles, their missions have
more in common than they realize. It’s a race against time
to stop men driven only by greed and power. But the people
they trust the most might be the very people working against
them—and “family” doesn’t mean what it used to. Will they
recognize their friends from their enemies in time to save
the people they love or will they lose each other in the process?

An Excerpt from Fractured Suns 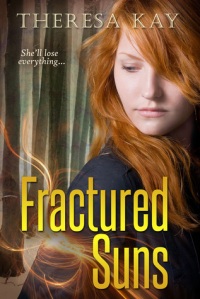 My stomach twists. That spark of life, the thing that makes her so special to me, could have been extinguished today. Not that I think my uncle would have killed her—he needs her too badly for that—but he would certainly have locked her up like he did me. And for her, that would have been nearly as bad.

Jax is like a brightly colored bird, flitting from branch to branch. Something to be admired, surely. Maybe even adored. But never caged. Yet, I let it happen once—let them capture her and lock her up while I stood there and did nothing. All because I took my uncle at his word. Worse, I had Rym bring her back here for my own selfish reasons, and she was almost caught again.

I will not ask her to return. At least not before I have found a way to deal with Vitrad. If we can discredit him, turn the tide of public opinion somehow, perhaps things can be different. If I could convince the Council to work with the humans… I can only hope the peace my father always wished for between us and the humans can still be found. 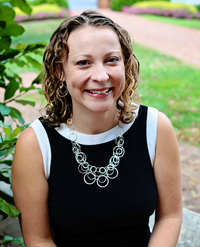 The only person she knows who had a subscription to Writer’s Digest at eleven and was always excited to write research papers, Theresa has been putting words to paper since a young age. Living in the mountains of central Virginia with her husband and two kids, she works as a paralegal by day, binges on Netflix at night and finds bits of time in between reading almost everything she can get her hands on and laundry to craft stories that tend to feature broken characters in sci-fi or paranormal worlds, with a touch of romance thrown in for good measure.

She’s constantly lost in one fictional universe or another and is a self-proclaimed “fangirl” who loves being sucked in to new books or TV shows. Theresa originally wanted to write horror novels as an ode to her childhood passion for Stephen King novels, but between her internal Muse’s ramblings and the constant praise for her sci-fi pieces from her writer’s group – The Rebel Writers – she knew she should stick with what was working.

You could win an ebook copy of either
Broken Skies  (book 1) or Fractured Suns
(book 2), winner’s choice! Just leave a
comment below and the winning name
will be drawn on Tuesday evening,
September 22nd. This drawing is
open internationally and the prize will
be sent out after October 15th.