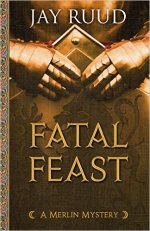 
Author Jay Rudd gives the reader a different twist in this tale of murder and revenge. Set in Camelot, at King Arthur’s court, Queen Guenivere appears to have poisoned one of her dinner guests. But why would the queen do such a thing? How did she manage it? It doesn’t make sense, yet with the accusation made Guenivere faces death by burning if found guilty.

King Arthur hands Gildas, the queen’s young page, the job of rousting Merlin the magician out of his cave to get to the bottom of things. “Prove the queen’s innocence,” he says.

Together, Merlin and Gildas have their work cut out for them in clearing the queen’s name before it’s too late. You see, finding a champion to defend Guenivere’s honor is a thankless task indeed. Ruthless retribution hides under the guise of courtly manners and false loyalties as the two detectives suspect everyone at the table at one time or another.

A fine twist towards the end makes sense of a plot that sometimes seems a little confusing. Many of the characters have similar names, making it hard to keep track of how they all figure in the case. A welcome dash of humor brings the characters, especially Gildas, to life. Anachronisms scattered here and there actually add to the story.

The queen? Well, Guenivere is the stuff of legend, is she not? 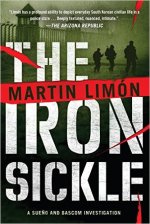 Twenty years after the truce brought hostilities to an end on the Korean peninsula, the head of the 8th United States Army Claims Office in Seoul is murdered when a Korean man slices his throat with a small iron sickle, bringing in CID agents George Sueno and Ernie Bascom to investigate.  The two have demonstrated in previous novels that they irreverently disobey orders but somehow achieve results.

In this case, they are stonewalled by both the Americans and Koreans, both of whom apparently do not wish the two to solve it.  It seems there is a dirty secret buried and the agents have to steal clues to guide their investigation.

The author’s novels ring with authenticity gained from firsthand knowledge.  He served 20 years in the Army, ten of them in Korea.  As a result, the sights and sounds provide the reader with the real flavor of the city, the taste of foods, the nights filled with bars, drinks and sex.  And, more important, the rigidness of the Army bureaucracy.