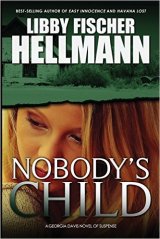 
This newest book by Libby Fischer Hellmann, the author of a number of standalones as well her acclaimed Ellie Foreman and Georgia Davis mystery series, features the latter, who was a cop for ten years and now and for the past five years a Chicago PI. There are parallel story lines, one dealing with her sudden awareness of the existence of a half-sister about whom she knew nothing, the other a new case where she is hired by an Evanston store manager to get to the bottom of a “flash rob” – a term new to me but apparently referencing a robbery combined with a flash mob – which had gone viral on YouTube – and prove that one of his employees was behind it.

The whole “flash rob” thing was very interesting:  “a powerful warning of what could happen to a society where envy, a sense of entitlement, and electronic toys converged.”  Georgia’s back-story includes the fact that her father was a cop, and that her mother had left when Georgia was ten.  The theme of feeling that she is “nobody’s child” is well-established.

Both story lines are very intriguing, and chapters are interspersed with flashbacks of the half-sister, Savannah (“Vanna”), going back one year in time, in Littleton, Colorado, a Denver suburb, when she was introduced to drugs that initially cost no more than sexual favors, but soon came to cost a lot more. Savannah had not known of Georgia’s existence until ten months ago. Ultimately the tale involves sex trafficking and other criminal acts that are a whole lot worse.

In the more personal story line, a note is delivered to Georgia saying “Georgia, I am your half sister, Savannah. I’m in Chicago and I’m pregnant. I need your help. Please find me.” In the professional plot line, Georgia’s job becomes threatening when she realizes she is being followed, immediately after which there is a drive-by shooting and the man following Georgia is murdered.

Georgia has trust/relationship/ communication issues, a theme repeated throughout.  But it becomes clear that she does appreciate a specific physical aspect of the men she meets.  I loved the way Ellie Foreman, video producer and equally wonderful protagonist in Ms. Hellmann’s other series, has an off-page presence in the novel, as well as the sly reference to author Michael Connelly and his own Lincoln Lawyer protag.  The book is well-written and very enjoyable, and is recommended.