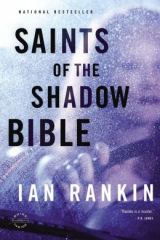 
When the Cold Case Group in which Rebus has been working is eliminated, he lucks out by being taken back with a spot in CID, albeit with a demotion.  Reduced from DI to DS, he now is subordinate to his long-time protégé, DI Clarke.  Of course, that doesn’t stop the old dinosaur from acting like he always has.

Rankin introduces a couple of surprises in this novel, the first being having Malcolm Fox, Rebus’s standing nemesis, as a co-investigator working together.  It comes about because Fox is performing his last assignment with the Complaints looking at a 30-year-old case involving the group known as the Saints of the Shadow Bible because they each swore fidelity to protect each other on a stand-in for the holy book.  Rebus had joined the group as a young DC soon after the arrest of a snitch who eventually got off on a murder charge through police mistakes.  This was in the Old Days, when anything went and they made their own rules.  The Solicitor General recently pushed through a retraction of the double jeopardy rule and was looking to resurrect the murder charge.  Rebus volunteers to assist in Fox’s efforts and the two learn to trust one another, leading to cooperation in another more recent investigation involving an auto accident and the murder of the Minister of Justice.

As with the rest of the series, Rebus shines and errs, but his character and ability always comes through.  The author has no need of our praise, but deserves accolades nonetheless.  The complexity of the plot provides Rebus with the chance to outthink everyone, but the surprise is that Fox rises to the occasion as a real CID detective.