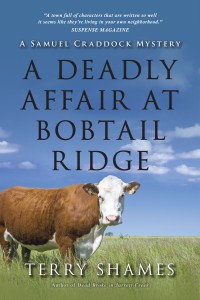 In the course of their developing friendship, Samuel Craddock has learned to accept that his neighbor Jenny Sandstone’s personal life is strictly secret. But when her dying mother tells Craddock that Jenny is in danger, he is confronted with a dilemma. He wants to respect Jenny’s privacy, but he is haunted by the urgency in the dying woman’s voice.

When Jenny is the victim of a suspicious car accident, Craddock has no choice but to get involved. He demands that she tell him what he needs to know to protect her and to solve the mysteries surrounding the strange events that began taking place as soon as Jenny’s mother passed away.

Forced to confront the past, Jenny plunges into a downward spiral of rage and despair. She is drinking heavily and seems bent on self-destruction. Craddock must tread lightly as he tries to find out who is behind the threats to her. But only by getting to the bottom of the secrets buried in Jenny’s past can he hope to save her both from herself and from whoever is out to harm her.

Not quite two years ago, Terry Shames rather quietly appeared on the mystery scene with Samuel Craddock, former police chief of a small Texas town. Before long, word began to spread about this appealing guy and the rambunctious citizens of Jarrett Creek and, today, readers everywhere wait for the treat they know is coming with each new entry in the series. A Deadly Affair at Bobtail Ridge is the latest and is every bit as entertaining as I had anticipated.

Make no mistake, murder is an ugly thing and this book, like its predecessors, is no lightweight romp through a horde of unlikely suspects. Samuel cares about his town and its people and is understandably worried when vandalism and threatened harm against a pair of horses seem to point to a bigger issue that initially eludes him. His friend Jenny is clearly at the core of whatever is going on and her reaction to his gentle probing is surprising as well as alarming. Later, missing persons add to the mix and dangerous secrets begin to come to light.

Jarrett Creek is full of people I’d like to know—Samuel, of course, a gentle soul named Truly, artist Ellen—and even some of the less engaging. The latter, after all, may not always be the most pleasant of people but they’re human and, thus, flawed but not irredeemable. Ms. Shames has a way with her characters that makes them very believable while she’s also quite adept at creating an interesting plot that holds the reader’s attention. I’m as pleased as I can be with this installment in Samuel Craddock’s life and am already wishing next January would get here so I can pick up The Necessary Death of Nonie Blake.

Leave a comment below to enter the
drawing
for a trade paperback copy of
A Deadly Affair at Bobtail Ridge.
The winning name will be drawn
on Sunday evening, April 26th.
Open to residents of the US.