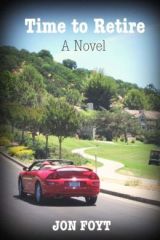 Looks like the Sunset Gardens Retirement Community may not be the best place for a certain clientele to think about retiring. The codes are uber strict there, and it’s going to take money—sometimes a lot of money—to live there. Especially when rates on just about everything keep going up. The question is, just where is all this money going?

The suicide of a Sunset Gardens Homeowner’s Association board member brings reporter Willy Herbst, not so far off from retirement himself, in to write about the retirement community as a whole. But strange things keep popping up, which draws Willy deeper and deeper into the puzzling aspects of this case. Along the way, Sally Saginaw, a younger intern at his newspaper, is assigned to help him out, and together they uproot some real surprises.

The story drifts a bit. Is it a full-out mystery, or an exposé on retirement communities and the people who live there? Certainly we find that old folks are not immune to learning criminal ways, given the chance. Especially when it comes to money.

Sally is a character who seems to have been added to the story to prove Willy is not quite over the hill, although a romance between them stretches belief. On the other hand, she is on hand to help when Willy, the victim as some of these nefarious folks strike again, is run down by a car.

When sixteen-year-old Piper Davenport’s mom packs up their
lives and heads to the coastal Florida town of Coral Sands,
Piper doesn’t care much for the view…until she
catches a glimpse at Rooks Carter.

Her mom’s “look but don’t touch” policy regarding the boy next
door is all but impossible to maintain, especially since he’s helping
his dad restore Piper’s new home, the Calloway Cottage. A gorgeous,
shirtless boy makes this boring little town a bit more exciting.

But after Piper and Rooks discover a secret in the walls of the
cottage, they have a chance to unravel the biggest mystery in
Coral Sands history – unless someone unravels them first.

Jessa Gabrielle is a young adult author who lives in the land of salt
water, palm trees, and sandy shorelines. She believes that summer
love is pure bliss and that she was a mermaid in a past life. Her
debut, The Summer of Lost Wishes, will be out later this year.