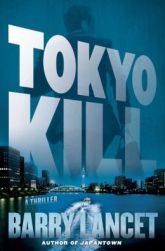 Jim Brodie made his initial appearance in Japantown, an action-packed thriller and the series debut.  He now returns in a novel which is no less filled with derring-do and lots of exotic descriptions of Japanese culture and history.  Brodie inherited a half-interest in Brodie Security, founded by his late father and headquartered in Tokyo, and also operates an art dealership, which he claims is his main profession, in San Francisco.

In Tokyo seeking a rare painting, Brodie is approached by a 90-year-old veteran of World War II asking for protection because members of his military detachment in Manchuria during the war-time occupation by Japan were being murdered.  After he supplies a security detail, events take over the course of the rest of the novel, as Brodie investigates the possibility of Triads, Chinese spies and others as the culprits.  And that takes on a life of its own.

The author has lived and worked in Japan for more than a quarter century, and the flavor and information about the country permeates with authenticity throughout the novel.  His description of various types of martial arts practiced in Japan is a further exhibit of his expertise.  Powerfully written, Tokyo Kill is a very enjoyable read, and this reader is looking forward to additions to the series.
Recommended.

The old adage that an army travels on its stomach certainly is an apt description for this standalone by the author of the terrific Maisie Dobbs series.  Like those novels, it is sent in and around World War I and captures the horrors of the Great War, the muddy trenches, the deaths and its effect on the folks back home.

The plot centers on Kezia Marchant who marries Tom, the younger brother of her good friend, Thea Brisenden, with whom she went to school, both becoming teachers.  Then upon marrying Tom, Kezia becomes a farm wife.  All this takes place shortly before the outbreak of hostilities, and when the war breaks out, Tom feels imperiled to enlist, leaving Kezia to manage the farm.

In the brief time before Tom leaves for France, a ritual develops, as Kezia learns to cook with a flourish, using ingenuity and good sense to set a table unlike anything her husband had ever experienced.  And when he receives letters in the trenches they are filled with glowing accounts of dinners Kezia has prepared for him, filling his drudgery with lightness.  And the rest of the soldiers in his unit take to the descriptions as well, adding to their joy in the face of the poor rations they have to endure.  This is a novel demonstrating the ability of people to withstand all sorts of horrible experiences and survive, and it is recommended.