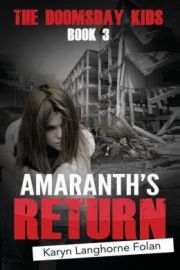 Rod Wasserman is dying of radiation poisoning. His last wish: to return to the Wasteland of Washington DC to see if there’s any hope that his mother has survived the nuclear blast.

Amaranth Jones has a wish, too: for the chance to redeem herself. To do that, she must leave Liam Harper and her friends at the Mountain Place and never return. When she discovers Rod packing to leave, she insists on joining him, whether he wants her company or not.

As they make their way back to ground zero, the two teens confront the horrors of their post-apocalyptic world. Food and water are scarce; nuclear winter has killed both plants and animals. Human life has little meaning and some desperate survivors have surrendered to the ultimate inhumanity: cannibalism. Threatened by weather, other survivors and their own demons, Amaranth and Rod must learn to trust each other if they have any hope of making it through hell and back. As Rod grows weaker, Amaranth is forced to make difficult choices to ensure their survival. How far will she go to help Rod achieve his last wish? And if they find Rod’s mother, can the three of them make it back to the Mountain Place alive?

Heartbreak. That’s what Amaranth’s Return is all about at its core.

Whew. I’m a big fan of post-apocalyptic fiction and of this series in particular but this episode is as gut-wrenching as anything I’ve read in this subgenre and, yet, I’m not the least bit sorry I read it. Amaranth and Rod have so very much going against them but they still manage to keep their goals in mind. Rod’s goal is to find out if there’s enough left of Washington, DC, that his mother might have survived the nuclear attack. Amaranth’s goal is much simpler—to help Rod achieve his.

The interesting thing about these two teens is that, for long stretches of the story, their ages were irrelevant. The horrible experiences they have would have been no better if they’d been adults and they have the shared bond of being in high school together, not that those years were a wonderful time for Amaranth. We learned much about these kids in the first two novels but now is when we get a much clearer picture of who they were and, more importantly, who they are now.

Ms. Folan has created a post-nuclear holocaust world that is entirely realistic and frightening and I frequently found myself wishing Rod would die because the author’s depictions of his radiation sickness are so intense and devastating. The journey Rod and Amaranth have undertaken is a quest but is also their time to come to a hardwon acceptance of past and present. They’ll meet others along the road who are suffering in their own ways and two will have a real impact on them but, in the end, this is the story of a pair of young people trying to accomplish something truly important even if it only matters to them.

My only criticism of Amaranth’s Return is that I felt the conclusion was rushed but the fourth book, Amy’s Gift, is about to come out; believe me, I’ll be on it like white on rice 😉