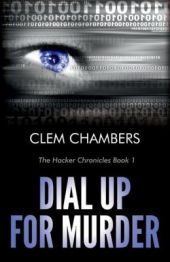 
Fascinating. Funny. Clever, and, at the end, rife with tension-filled risk. Today, most of us have some sense of the shorthand of text messaging. In the mid-1980’s that was a skill yet to be mastered. Digital technology and communication thereby gained was still only on the horizon for many people.

But, as is true of so many inventions of the clever human intellect, there is almost always a potential for evil, as well as for good. Here we have a young man, Peter Talbot, by name, who has built upon a rock of a computer, a modest information service. Forces of both good and evil immediately discover ways to use Peter and his service for their own ends. The resulting expansion is making Peter a wealthy man, but it is also making him vulnerable to forces that first would use him and then destroy him. Will he win out in the end?

Like many English crime novels, the story is heavily populated with quirky, unusual, and odd characters and ordinary folks who act in quirky and odd ways. Consider George, an old ex-paratrooper who is at odds with the world. When he saves Peter from undesirable attention, Peter offers him a job. A shadowy figure we are expected to accept at face value, apparently some sort of government spook, enjoins Peter to provide client information, some of whom are obviously on the wrong side of the law, prostitution and espionage appear in the mix. Young hackers or computer game developers wander in and out and then the American Mob show up.

Readers will have already caught on to the odd style, often cheeky observations of the characters, the unusual and often abrupt short—hand style that cuts off potentially tedious descriptive passages. The author employs a sometimes wild narrative style that fits well with the story and the characters.

There are some aspects of the book that may put readers off. Logical progression sometimes is let go by the boards in favor of a faster pace. Foregone conclusions and almost-obvious results crop up from time to time. Still, the characters are charming if mis-identified. Talbot, for example, is not a computer hacker, he’s a smart, up-coming young businessman. He’s also wise beyond his years, careful around murderers, fit enough to get out of tight scrapes and has a way with certain female characters.

Leave a comment below to enter the drawing
for a print copy of Dial Up for Murder. There
will be three winners and the winning names
will be drawn on Tuesday evening, March 31st.
Open internationally.