A coed, one of Professor Susan Hogan’s American Lit students has gone missing, and a few days later, her body is finally discovered in the trunk of Susan’s car. Why was this particular coed,who seemed the perfect student, daughter, girlfriend, murdered? Why was Missy Jackson’s body hidden in her car? That’s what Susan and her boyfriend Jake, a security officer at the university, wants to know. However, they’d better work fast because she may be fated to be the killer’s next victim. Unless the cops hurry up and arrest her for the murder.

Lots of suspects are introduced for the reader to choose among in the quest to deduce the murderer. Lots of twists and turns and red herrings to either help or to hinder. Lots of threats and scary, tension filled scenes thrust the story along, and the ending is a satisfactory conclusion with just the right amount of final explanation.

The only thing that bothered me–and I’m not sure that’s the right word–is why Susan is so “prickly,” (a word used in the back cover blurb to describe her) especially with her loved ones and her supporters. I found her reluctance to accept help or to even discuss measures to preserve her own life distracting at times. 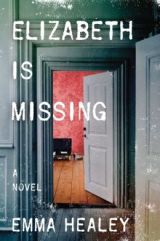 “Elizabeth is missing” is the sole notation made on most of the innumerable notes that Maud Horsham constantly makes and puts in any available pocket, as a hoped-for aid to her increasingly failing memory.  Maud is in an advancing state of dementia, and more often than not cannot remember where she is, or with whom, even when the latter is her daughter, or her granddaughter (sometimes mistaking the latter for the former).  But she knows that her best friend – – indeed, just about her only remaining friend, as she remembers “The others are in homes or in graves” – –  appears to be missing.  She takes any path she can conjure up to try to solve the mystery, resorting to putting an ad in the local newspaper for any information anyone may have as to her whereabouts.

And her friend Elizabeth is not the only ‘disappeared’ person Maud is trying to track down.  Even 70 years later (which doesn’t matter so much when one has no idea of time frames), Maud is still trying to find her sister, Sukey, missing since the time after the London blitz, when Maud was 15 years old and England was still trying to recover from the war, enduring rationed food and bombed-out homes.  The narrative, such as it is, jumps back and forth in time, from looking for her sister to searching for her friend, sometimes for both at seemingly the same time.  It is often difficult just to follow where Maud is, both for Maud herself as well as for the reader.

This book is unlike any I have ever read.  Maud is the first-person narrator, and that narrative is as disjointed as Maud’s mind, conveying, quite convincingly, that state of being.  I must admit to a feeling of ‘there but for the grace of G-d go . . .’ well, I, or indeed any of us.  The novel is one that literally haunted me well after I had finished reading it, and I suspect it may do that for many readers.

Treena can’t wait for Rating Day. Her high score will mean a life
of luxury, showing the world that she’s a valuable member of
society, not a pathetic waste of space. It won’t hurt her chances
with her top-Rated boyfriend, either. But when the big day
arrives, her true number shocks everyone.

To get her life—and boyfriend—back, she must go undercover and
expose a military spy. Doesn’t sound too hard, except that someone
seems to want her dead. And then there’s the mysterious soldier with a
haunted past and beautiful brown eyes. Together, they discover a dark
numbers conspiracy, one that shatters the nation’s future. They must
band together if they are to survive the dangerous game of
numbers—and the terrible war that rages within Treena’s heart.

A Q&A with Rebecca Rode

Q: Will you tell us about Numbers Game?

A: Absolutely! In the New Order Republic of America, 16-year-olds are given a Rating, a number that encompasses what they’re worth to society. It determines their career, living conditions, and potential partners. This is the story of Treena, who gets a different Rating than the one she earned. She decides to fight for what is rightfully hers, determined to get her boyfriend back in the process.

Meanwhile, she meets Vance, a mysterious prisoner-turned-soldier who has his own agenda. When someone tries to kill Treena—twice—they uncover a dark conspiracy that risks much more than Treena’s Rating.

Q: Great. You probably get this question a lot, but the concept is so unique that I have to ask—where did you get the idea for Numbers Game?

A: I love this question! My husband sent me to the bank to finalize the loan on the truck he was buying. I looked at my credit score and thought how strange it was that one number was supposed to incorporate everything about me—my purchase history, how reliable I’d been, whether they could trust me to make payments, that sort of thing. And then I thought how strange it was, that we as citizens are so trusting of the accuracy of that little number, and how important it is in our lives. It spiraled from there—what if someone was manipulating the numbers? What if the number included appearance and intelligence rather than just financial history? It didn’t take long for the plot to unfold in my mind.

Q: What type of reader would like this book?

A: I tell people that it’s like a thriller version of The Scarlet Letter, but set in the future. With bombs. And kissing. Dystopian fans who like Divergent, Hunger Games, and Matched would love it.

Q: Who is your favorite character and why?

A: At first, Tali was my favorite. She knows exactly what she wants and doesn’t put up with anything. But now that the book is done, I think Vance has overtaken her as my favorite. The way he sees the world and struggles to survive while torn between two worlds really resonates with me.

Q: What was your favorite part of the writing process? What was the hardest?

A: I really enjoyed taking an idea and running with it. Once I had the world solidified in my head, it was fun to explore all the different aspects of it—political, social, financial, emotional, etc. I wrote myself into a dozen corners because I was just having too much fun.

The hardest part? Probably the time it took to finish it. When I began writing Numbers Game in 2012, I was also juggling a journalism career and three kids, and then my nonfiction book was accepted for publication, so that took all my remaining hours. When my fourth child was born, everything came to a screeching halt for a while. It wasn’t until Numbers Game won first place in a statewide writing contest in that I decided to buckle down and get serious with it.

Q: Why did you decide to make it a series instead of a stand-alone book?

A: You know how some authors say that their characters grab hold of the story and steer it in a different direction without their permission? That’s kind of what happened here. It just couldn’t end with this book. There was so much more that needed to be explored. Besides, Treena had a little more growing to do, and I think you’ll love the person that she becomes.

Q: Thanks for joining us. Where can we find out more?

A: Visit my website at www.AuthorRebeccaRode.com or sign up for my monthly newsletter at http://eepurl.com/bdwUKL. I give away free stuff sometimes, if you’re into that type of thing. But remember, Numbers Game is only discounted on Amazon for a few days, so you may want to snatch it up quick.

Rebecca Rode is an award-winning author, journalist, and mother of four. She is the author of the YA dystopian novel, Numbers Game, and the inspirational book, How to Have Peace When You’re Falling to Pieces. She also writes for Deseret News, KSL.com, FamilyShare, and Provo Daily Herald. However, her true love is writing for teenagers. She enjoys traveling, reading, and martial arts, and she has a ridiculous addiction to chocolate-banana shakes. Visit her at www.AuthorRebeccaRode.com.

(1) You can win an ebook copy of Numbers Game by Rebecca Rode! Just
leave a comment below and the winning name will be drawn on
Thursday evening, March 19th. This drawing is open internationally
and the prize will be sent out after April 15th.