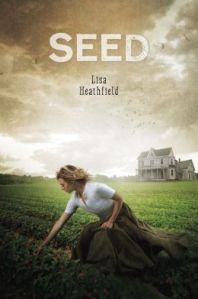 All that Pearl knows can be encapsulated in one word: Seed. It is the isolated community that she was born into. It is the land that she sows and reaps. It is the center of her family and everything that means home. And it is all kept under the watchful eye of Papa S.

At fifteen years old, Pearl is finally old enough to be chosen as Papa S.’s companion. She feels excitement . . . and surprising trepidation that she cannot explain. The arrival of a new family into the Seed community—particularly the teenage son, Ellis—only complicates the life and lifestyle that Pearl has depended upon as safe and constant. Ellis is compelling, charming, and worldly, and he seems to have a lot of answers to questions Pearl has never thought to ask. But as Pearl digs to the roots of the truth, only she can decide what she will allow to come to the surface.

Sometimes those of us on the outside of a cult have a hard time understanding how the leader can grasp such total control and we feel sorry and fearful for his (or her) followers. We recognize that these members generally have such a strong vulnerability, for a variety of reasons, that they are easy prey and, while we have great sympathy for them, we also can’t help feeling a little superior, a little like we can’t believe anyone could fall for such evil disguised by so-called love.

Such feelings we might have for the victims don’t work in Pearl’s case. Certainly, we’re afraid for her and have to hope that she will open her eyes and see the truth but we can’t really pity her for being under Papa S.’s thumb so completely because she has never known any other life and doesn’t even have the possible protection of blood family. Pearl is so naive that she truly believes “no one is unhappy at Seed”. Only when the Outsider, Ellis, comes does Pearl begin to glimpse fragments of the truth behind the cult and the man who personifies the term narcissist.

At times, I had a little trouble staying with the story because so much of it moves along at a glacial pace but the occasional narrative from an unidentified woman added just enough complication to the general creepiness to keep me engaged…and then came the last few chapters, a somewhat predictable yet still horrifying culmination to all the lies and the attempts at freedom. All in all, I think this is a story that should be read, especially by those who might become susceptible to the machinations of potential cult leaders.