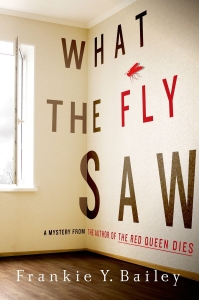 The morning after a blizzard that shut down the city, funeral director Kevin Novak is found dead in the basement of his funeral home. The arrow sticking out of his chest came from his own hunting bow.

A loving husband and father and an active member of a local megachurch, Novak has no known enemies. His family and friends say he was depressed because his best friend died suddenly of a heart attack and Novak blamed himself. But what does his guilt have to do with his death? Maybe nothing, maybe a lot. The minister of the megachurch and the psychiatrist who provides counseling to church members–do either of them know more than they are saying?

Detective Hannah McCabe and her partner, Mike Baxter, sort through lies and evasions to solve the riddle of Novak’s death, while unanswered questions from another high-profile case, and McCabe’s own suspicions make for a dynamite crime novel.

Frankie Y. Bailey is a favorite of mine, going back to May of 2001 when she came to my bookstore for a big mystery author event. Her second Lizzie Stuart mystery was out and I had found the series to be charming and entertaining. Frankie herself was no less charming and entertaining and, over the years, I’ve been glad to run into her at various events and conventions.

When I first heard Frankie was starting a futuristic mystery series set in an alternate universe, I admit I raised an eyebrow because, after all, she’d never shown any inclination towards the science fiction-y book world. I was delighted to find that I thoroughly enjoyed The Red Queen Dies and I liked Detectives Hannah McCabe and Mike Baxter a lot.

Now, they’re back and I’m so happy they are. I confess that the murder of a funeral home director gave me a bit of the heebie-jeebies because I’ve had such a person in my life just recently but I got over that momentary uneasiness right away. Hannah gave me a feeling of indifference at times but no more than many other sleuths, professional or amateur, and there’s no doubt she does her job well. This murder is an interesting one what with arrows, skeletons, arsenic and what not and the two investigators have quite a task ahead of them, filled with twist upon turn.

Mystery fans should not fear the setting in an alternate universe. Other than the occasional anomaly, this Albany is not all that different from the one we know and the time is only a few years ahead of our own so things feel famiilar and comfortable. The setting simply adds an element of novelty now and then and the occasional contraption or  obscure anagram.

Once again, Ms. Bailey has brought us a well-constructed mystery full of all the investigative convolutions we fans love so well but, unfortunately, we now have to wait a year or so for the next book, much to my dismay ;-).