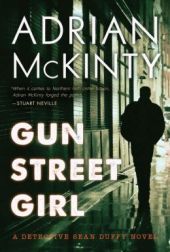 
Another powerful and excellent offering from a superb writer and publisher. I won’t reveal the basis of this excellent political suspense novel because that would spoil the surprise. It’s a stunner and a real stick in the eye.

Sean Duffy is an older, nearly burned-out, detective and something of an anomaly. He’s a Catholic copper in the Royal Ulster Constabulary of Northern Ireland. The RUC is an intensely protestant law enforcement agency and in the time this novel is set, the mid-eighties when Margaret Thatcher and Ronald Reagan ruled the western world, Duffy had his internal problems in addition to solving the murders and other crimes. Crimes of all sorts, large and small, proliferated in Northern Ireland during this period.

Duffy seconds a younger, less experienced, detective in their Belfast unit when a prominent couple is discovered executed in their loungers before the large television. Their son is missing. As the case develops, Duffy struggles with near despair over the level of violence and economic downturn in the country. He struggles as well with an attractive offer to move to England and join MI5, the British equivalent of the FBI. The job would entail far less action and more desk work. Duffy is torn, not least because the offer comes from an attractive woman, the Gun Street Girl of the title.

McKinty is a powerful writer in complete control of his medium. The novel thunders along amid rocks, bullets and political and emotionally fraught maneuvering by Duffy’s superiors. It is by turns, thoughtful, moody, precisely on target and exploding with action. The darkness is expertly leavened with humor of a conscious sort that only enlarges and enhances the fine characters and setting. It is amazing that McKinty hasn’t been swept up by one of the large publishers. A rare and outstanding effort.

Leave a comment below to enter the
drawing for a trade paperback copy of
Gun Street Girl. The winning name will be
drawn on Monday evening, March 9th.
Open to residents of the US and Canada.