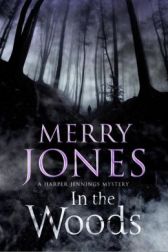 Harper Jennings – mother, Iraqi war vet and archaeology graduate – knows she should be counting her blessings that she’s able to enjoy a child-free camping trip with husband Hank. Hank’s recovery from a brain injury after falling from their roof is nothing short of miraculous. But . . . Harper misses baby Chloe. And she worries that, in being so wrapped up in her toddler, she’s lost her own identity.

But her worries pale into insignificance when she stumbles across a body in the woods. Accident? Harper doesn’t think so, and nor does Ranger Daniels, who seems to blame local militia known as the Hunt Club – who will do anything, it seems, to protect the land they see as their birthright.

Harper wonders what exactly she’s doing, in some dark state forest, tripping over corpses, when she could be at home with her little girl – but when a fellow camper’s husband goes missing, she finds herself reluctantly sucked into the hunt, and into a waking nightmare . . .

What should be a nail-biting tale full of suspense misses the mark a bit although there are qualities about this book that I liked.

To me, it makes no sense that Harper and Hank would go on a camping trip in an area where hunting is a local and tourist pastime. Harper’s PTSD is severe enough that she frequently slides into an episode , triggered by predictable events. Is it any surprise that gunshots and explosions would set her off? Why on earth would she subject herself to the sound of gunshots? Perhaps someday when she’s farther along on her path to healing that might be part of her treatment but now?

The other thing that concerned me is the behavior of one of the possible killers, behavior that can only be termed silly . Yes, a killer of this type is deranged and his…or her…behavior is going to be beyond what the normal human being can fully understand but we don’t generally think of them as silly, do we?

On the positive side, Ms. Jones has created enough scenarios to confuse the reader as well as the good guys. In fact, identifying the good guys is not always an easy thing to do and coming up with motivations that adequately explain things is a little dicey, too, especially regarding a pair of guys named Pete and Bob. Figuring out how the disparate motives and deaths and potential killer(s) all fit together is what kept me reading (although I wondered why the author wanted to hide the identity of the Sector Chief when I spotted him almost immediately).

I have to make a couple of comments about the construction of this book. First, the author knows how to string a sentence together and grammatical/typo errors were infrequent. What I didn’t like was the lack of chapter divisions; a simple paragraph break is just not enough, particularly when the scene is changing. Many times while I was reading, I’d have to stop for a few seconds to get my bearings, so to speak, and that always lessens the tension, not a good thing in a crime novel.

On the whole, while I have some issues with In the Woods, it’s a decent mystery and I certainly don’t regret the time spent.