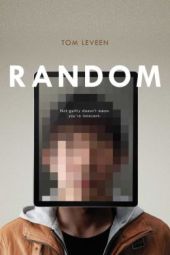 Late at night Tori receives a random phone call. It’s a wrong number. But the caller seems to want to talk, so she stays on the line.

He asks for a single thing—one reason not to kill himself.

The request plunges her into confusion. Because if this random caller actually does what he plans, he’ll be the second person connected to Tori to take his own life. And the first just might land her in jail. After her Facebook page became Exhibit A in a tragic national news story about cyberbullying, Tori can’t help but suspect the caller is a fraud. But what if he’s not? Her words alone may hold the power of life or death.

With the clock ticking, Tori has little time to save a stranger—and maybe redeem herself—leading to a startling conclusion that changes everything…

That tagline says a lot about the story in Random, the concept that you can be guilty in a sense even if not technically speaking. In this case, Tori can’t admit to anyone, much less herself, that her own behavior contributed to the conditions that led a classmate to commit suicide. Tomorrow morning, she’ll be appearing before a judge to enter a plea to the charges against her; her parents are trying very hard to keep the family on an even keel but Tori’s brother, Jack, cannot bring himself to forgive what she has done or her attitude since.

Attitude is the crux of the problem because Tori is completely oblivious to the pain she caused Kevin, the boy who started high school alongside her with some hope and a good deal of apprehension, or perhaps it would be better to say she’s just about as shallow as a person can get. Sure, she’s upset about what’s to come tomorrow but not because of what happened to Kevin. She’s upset because (1) she’s being blamed, (2) her so-called friends, the people she was trying so hard to impress, are not reaching out to her and (3) everybody’s being mean to her, taking away her computer, making her use an old cellphone that <gasp> only makes phone calls, talking about her to the press. In short, Tori is living in a poor-pitiful-me world. Then comes the call from a stranger, the call that will demand much of Tori.

Tori is a very interesting character, largely because she’s so self-centered, so focused on what’s happening to her with very little concern for the people around her. When Jack tries to tell her how he felt abandoned by her when school was tough for him, she doesn’t get it. She also doesn’t get that Noah, her only remaining friend, cares a great deal for her or that Andrew, the guy on the other end of the phone call, might do something terrible if she can’t stop him. Actually, she does get that last part but she’s mostly concerned about how it will look if she’s connected to a second suicide.

Andrew himself is an enigma. Is he really about to commit suicide or is this a setup meant to harass Tori? At one moment, I empathized with him and, at the next, I thought he was really dicey, someone not to be trusted, then I’d bounce back the other way again. Jack, on the other hand, had my sympathies all along. He was a victim in more than one way and I truly understood why he felt as he did about his sister.

The real class act here is Noah, a boy who clearly cared about Tori and wished her well, a boy who would go to great lengths to make things a little better for her. Noah is a character I could love.

Will Tori finally understand why she’s in trouble, what she did to Kevin, or even just grow up a little and become a decent human being? The answers may or may not come but the tale of her very long night is worth putting up with this girl. I’d never read anything by Tom Leveen before but he has a new fan because he made me look just a little bit below the surface.