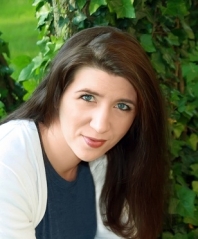 Ohioan and Double RWA Golden Heart Finalist NATALIE D. RICHARDS won her first writing competition in the second grade with her short story about Barbara Frances Bizzlefishes (who wouldn’t dare do the dishes). After getting lost in maze of cubicles, Natalie found her way back to storytelling, following the genre of her heart, teen fiction. Natalie lives in Ohio with her amazing husband, their three children, and a giant dust-mop who swears he’s the family dog.

I’m delighted to welcome Natalie D. Richards
today to share a few thoughts with us.

cncbooks: How much of you is in your character, Piper?

Ms. Richards: Piper is kind of earthy and artsy in a way I’m truly envious of. She’s embracing her creative side with full confidence at a much earlier age than I did. Don’t get me wrong, she makes some truly bad decisions along the way, but she’s got an inner calm and a quiet confidence that is totally foreign to me.

cncbooks: You just woke up as a castaway on a remote, uncharted island and you have one book to keep you entertained but it’s the very last book you’d want. What is it?

Ms. Richards: Haha, I love this question! Okay, for me the last book I’d want would be an obsolete non-fiction title. I’m thinking something like Programming in Turbo Pascal. 😉

cncbooks: What five things must you have with you on a deserted island besides that one book?

Ms. Richards: Assuming there is food and fresh water, I’m going to go with:

1. A super durable high-end laptop with satellite internet access. (Hey, you didn’t say there were limits on what I could ask for!)
2. One of those super cool, stretchy hammocks so I could not sleep on the sand.
3. A good knife. (I’ve watched enough survival crap to know I really would need this.)
4. Burt’s Bees lip balm.
5. A very large toiletries set. Because isolated or not, hygiene is a good thing.

1. Her camera with a ridiculously large memory card.
2. A way to charge her camera battery.
3. A good knife. (Hey, she’s a sensible girl. I think she’s seen some of the same shows.)
4. A fire-starting kit (because she pays better attention to said shows).
5. A first-aid kit (untreated injuries are probably a bigger threat than stanky morning breath).

cncbooks: What has been the toughest criticism you’ve been given as an author?

Ms. Richards: Reviews can be really hard. As a reader I totally respect that different books work for different readers, so usually I can appreciate less-than-complimentary reviews for their differing perspective. I also appreciate the time they took to read and put together thoughts. That said, when reviews or reviewers cross into angry or mean-spirited ranting, that’s very hard. I’ve been fortunate not to encounter too many, but they are zero fun.

cncbooks: What has been the best compliment?

Ms. Richards: I’ve been incredibly blessed by readers who reach out to tell me my book kept them up all night. That’s personally my favorite thing to hear—I couldn’t stop reading. I lost sleep. I was trying to read at the red lights—anything like that really makes me grin. It’s lovely for readers to reach out. Keeps me going on the days it’s not so fun.

cncbooks: If you had it to do over again, what would you do differently in your writing career?

Ms. Richards: I would have gotten serious about it earlier. I spent far too long fearing the pursuit of what felt like a high-failure-rate dream.

Ms. Richards: The readers are the best. The fear is the worst. Simple as that. 😉

cncbooks: How do you think your life experiences have prepared you for writing young adult psychological thrillers?

Ms. Richards: I think I write thrillers because I’m perpetually paranoid! In parking lots, I’m always looking around, trying to decide who’s most likely to try to stab me or throw me in the back of a rusty cargo van. My mom watched a lot of horror movies. I was forbidden to watch them, but we lived in a tiny apartment, so I picked up enough pieces to fill my imagination with horrifying things. 😉

cncbooks: What is your favorite scene in GONE TOO FAR and why?

Ms. Richards: The scene at the basketball game. I couldn’t wait to get to it. When I finally wrote it, I was leaned forward about to launch off the couch. I was practically pounding the keys. Crazy intense and fun. I also really loved the hot cocoa scene, and not just for the kissing.

cncbooks: What’s next for you?

Ms. Richards: My next book, tentatively titled MY SECRET TO TELL, is in edits right now. This one’s set in my favorite town in North Carolina (Beaufort) and it’s all about the lies we tell ourselves and the ones we love.

Thank you so much for having me! I thought these
interview questions were great! Thanks so much!!

My review of Six Months Later can be found here.

And my review of Gone Too Far is here.

Keeping secrets ruined her life. But the truth might just kill her.

Piper Woods can’t wait for the purgatory of senior year to end. She skirts the fringes of high school like a pro until the morning she finds a notebook with mutilated photographs and a list of student sins. She’s sure the book is too gruesome to be true, until pretty, popular Stella dies after a sex-tape goes viral. Everyone’s sure it’s suicide, but Piper remembers Stella’s name from the book and begins to suspect something much worse.

Drowning in secrets she doesn’t want to keep, Piper’s fears are confirmed when she receives an anonymous text message daring her to make things right. All she needs to do is choose a name, the name of someone who deserves to be punished…