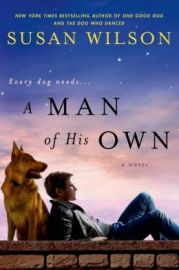 Rick Stanton was a promising professional baseball player with dreams of playing in the major leagues and starting a family with his young wife, Francesca, when World War II changed everything.  Rick returns from the war with his body broken and his dreams shattered.  But it was not just body and spirit he sacrificed for the war. He and Francesca volunteered their beloved dog, Pax, for the Army’s K-9 Corp, not knowing if they’d ever see him again.

Keller Nicholson is the soldier who fought the war with Pax by his side, and the two have the kind of profound bond that can only be forged in war.  Pax is the closest Keller has to a sense of family, and he can’t bear the thought of returning him to the Stantons.  But Rick and Francesca refuse to give him up.  Instead, an arrangement is made: Keller will work as Rick’s live-in aide. And thus an unlikely family is formed, with steadfast Pax at the center.   As they try to build a new life out of the ashes, Keller and Francesca struggle to ignore their growing attraction to each other, and Rick, believing that he can no longer give Francesca what she needs and wants, quietly plans a way out.

All three of them need healing. All three of them are lost. And in Susan Wilson’s A Man of His Own, Pax, with his unconditional love and unwavering loyalty, may be the only one who can guide them home.

I’ve read a number of “life of a dog” books that take you from the pup’s early days to the end of his life (or close to it) but this one is very different. A Man of His Own is the story of a service dog who spends his life in more than one kind of service and it brings together the very diverse worlds of war and baseball.

Rick is at the beginning of what should be a promising professional career in the sport he loves, baseball, as he’s been called up to a AA team, the Hartford Bees. Then, he literally trips over a frightened puppy and we get a first glimpse of what kind of man Rick is, the kind who worries about betraying an animal’s trust. This little German Shepherd now has a name, Pax, and a home.

Seemingly a world away but connected by the lure of baseball, Francesca grows up wanting more for herself than a farming life. Visiting a cousin in Boston, she has her first encounter with her future at a game between her beloved St. Louis Cardinals and the Boston Braves. As it turns out, that future will include a very special dog who isn’t at all sure Francesca is worthy of Rick.

And then war comes and life changes dramatically for everyone in this little family. It’s difficult to say whether Rick’s condition after war or Pax’s introduction to the battlefield is more traumatic but, certainly, life will never be the same again for any of them or for Keller, the man who fought by Pax’s side.

This is a tale that could be really depressing and, in some ways, it is, but it’s the love these people and this dog have for each other that rises to the surface and has ingrained itself into my “book memory”. Each character is vividly drawn and captured my heart but it’s Pax who ties it all together and it’s Pax who represents the possibilities that exist in the face of tragedy. I will remember Rick, Francesca, Keller and this wonderful dog for a long time, especially when I see news reports of our contemporary war veterans and their canine partners. Ms. Wilson knows the hearts of people and dogs and the tale she has woven is as comforting and joyful as it is sad and tragic.