A New Adult Contemporary series
with all the romance you’d expect, but
the killer—and lovers—that you don’t.

“We have someone who saw you struggling with the deceased before using that knife. Your best friend, and our eye witness.”

In nine weeks Charlie Miller’s life goes from high-rolling perfection to a crypt of sin. All it takes is one night, one blade, and her boyfriend, best friend and new friends all either end up as suspects or dead.

Nate Westcott, a pierced, tattooed, charismatic lawyer, is a man she can’t have—but a seductive danger she can’t ignore. He’s cocky, infuriating, brilliant and wrong, yet he makes her question whether she really is the good girl she wants to be or more like the selfish killer everyone thinks she is.

And her body wants him in ways she’s not supposed to crave.

As the weeks close in, cracks start forming in her everyday world of pro football golden boys, law school domination and New York City nightlife. Everyone she cares about is at risk because one of them doesn’t love Charlie back. In fact, they want her out of the way. Disposed of. Set up.

One more step, and all Charlie has to do is fall through.

When I started reading this, I was more than a little apprehensive about what precisely I was going to find. My concern was that, when I first heard about this series, I thought it was a straightforward mystery with some romance thrown in, which is fine with me. Then, as time approached for the blog tour to begin, some pictures came to light which are considerably racier than I anticipated, one in particular bordering on going too far (for me, not necessarily for others). I’d promised, though, so I soldiered on.

I’m very happy to say, on behalf of those readers who lean toward the clean side, that this is perfectly fine. There are a few scenes that you won’t want your 11-year-old to read but they’re not even close to erotica, just a little bit heated. Besides, this is an adult mystery, not intended for your 11-year-old  😉

The story opens in New York City with a scene from the future, 9 weeks ahead, and our heroine, Charlie, is being grilled by a detective about what seems to be a murder. She doesn’t react well to what she considers an interrogation and plays the law student card. Her prickliness seems likely to put her in the crosshairs at some point in the investigation.

The scene shifts and we’re now in Week 0 with this particular novella covering two weeks. We’re introduced to what we think may be the major characters—law student Charlie, her football-playing boyfriend, Slade, her best friend, Lara, new friend and fellow law student Reagan, and Reagan’s brother, tattooed rock drummer Nate. While Charlie tries to cope with being in the sports world limelight, Lara is kind of footloose but a spark appears in her eye when she meets Nate.

By the nature of the beast, a novella is difficult to review because there hasn’t been enough time to get really in depth with the characters or the plot but Snapped is more than entertaining and, while I don’t have a good handle yet on who I like and who I don’t or who’s going to be involved in the crime, Ms. Allison has offered enough to entice me on to the next part of the story, Shade. 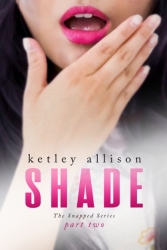 Famous boyfriend, penthouse on Park Avenue, full scholarship and best friend along for the ride?

A smartass drummer-lawyer boy, dark obsession and a hint of betrayal?

Shade opens at Week 3 and covers three weeks. Lara is now working for Nate in the family bar and clams up when Charlie asks how things are going. Why all the mystery?

I appreciate Charlie’s self-deprecation. Here’s a girl who attracted and still holds the attention of a hot-looking football player who could easily have any girl he wants but she’s full of insecurities. She can’t pull off sexy texting and gets squirmy when football groupies hang on Slade. It’s kind of nice to see a golden girl who isn’t sure she belongs where she is rather than the self-absorbed girl in love with herself that Charlie could have been. Still, Slade truly loves her. Doesn’t he?

And then the connections among the five friends begin to crumble, just a little. Cracks in the foundation, hints of betrayal, and it all touches Charlie. Suddenly, loyalties come into question and the one person who’s the most enigmatic, Nate, suddenly has much more of a presence in Charlie’s life. At the same time, there’s a side to Slade that’s new to Charlie.

The tension ratchets up in this second novella in the series and the distrust that begins to creep in is palpable. At the end of this three week period, I have no clue where this is all heading or what’s going to happen to these five people. I’m sure I’m beginning to dislike Slade and perhaps Reagan but…I could be wrong. Guess I’ll have to wait for the third novella, Sin, due out in December.

Ketley Allison began her career by writing books as birthday presents for her friends (with her friend as the main character and opposite a super sexy lead, of course) before ending it in order to walk down a path she thought she was supposed to follow.

The writing bug never left her—and, in fact, would often bleed into the official papers she was supposed to write—so now Ketley’s putting down her suit and finally following her dream. While her friends are no longer the stars of her books, she still throws in bits and pieces of them into each and every one of her characters.

As a result, her books tend to focus a lot on friendships as well as love, because let’s be honest, friends are what really get you through—especially when your epic love turns into epic heartbreak.

ENTWINED, Book II in the Dark Souls Series, is also available on Amazon and Barnes & Noble!