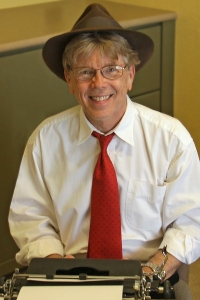 Mark S. Bacon drew some of the inspiration for his new suspense novel from early in his career.  He covered the police beat for a southern California newspaper and later wrote ads and commercials as a copywriter for Knott’s Berry Farm, a large theme park.

He’s written for radio, TV, the web, magazines and for newspapers, most recently as a correspondent for the San Francisco Chronicle. He has an MA in mass media criticism from UNLV and taught journalism as an adjunct university professor.

He is the author of several business books, one of which was selected as a best business book of the year by the Library Journal and printed in four languages.  Before tackling his debut mystery novel, he published two collections of mystery flash fiction stories, including Cops, Crooks and Other Stories in 100 Words.

First sentences have always fascinated me.  Dickens did a pretty good job with A Tale of Two Cities.  Do all authors—particularly mystery authors—grab your attention and draw you into a story with a sentence or two?  Not always.

When I wrote for newspapers, I’d usually spend a long time on the lead, particularly with feature stories. It would often take me as much time to write the lead as it did for the rest of the story.  That first sentence not only enticed the reader, but it gave me a theme or focus that I needed to complete the story.

So, when I wrote my debut mystery novel, I paid particular attention to the first sentence.  And I looked around for good examples.

Elmore Leonard famously said, “Never open a book with weather,” but that’s exactly what many authors have done, including Raymond Chandler in The Big Sleep:

It was about eleven o’clock in the morning, mid-October, with the sun not shining and a look of hard wet rain in the clearness of the foothills.

One evening, it was toward the end of October, Harry Arno said to the woman he’d been seeing on and off the past few years, “I’ve made a decision. I’m going to tell you something I’ve never told anyone before in my life.”

A first sentence can do more than draw you into the story; it can provide insight into a character, as Leonard does in Pronto.  Dialog is often a good way to do this.  But just a shocking statement to make you read on is a good beginning.  Leonard began Glitz,(1985) with this:

“The night Vincent was shot he saw it coming.”

Agatha Christie, who wrote more successful novels than any two or three mystery writers you can think of, seemed to know the importance of a first sentence as indicated by this sample that begins the 1923 book, Murder on the Links, her third novel:

I believe that a well-known anecdote exists to the effect that a young writer, determined to make the commencement of his story forcible and original enough to catch and rivet the attention of the most blasé of editors, penned the following sentence: “Hell!” said the Duchess.

In Appointment with Death, (1937) her first sentence read, 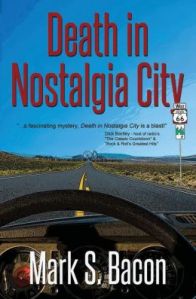 But as her career progressed and her sales soared, her first sentences became more prosaic.  All she really needed to hook you was bring on stage one of her two famous detectives.

“Hercule Poirot was sitting at the breakfast table.”  Third Girl  (1966)

My new novel, Death in Nostalgia City, takes place in a re-creation of an entire small town from the early 1970s.  This baby boomer theme park is complete with period cars, clothes, music, shops, restaurants, hotels, fads—the works.  To start the story, I wanted to intrigue the reader with this setting and get my protagonist in on the action.  A tall order.

Naturally, I avoided weather, and since my protagonist, Lyle Deming, is not (yet) well known, I didn’t lead with his name.  My first sentence has no action, but it describes the protagonist’s attitude to modernity, an important point because of the novel’s retro theme.  The story begins,

Whose idea was it to replace the chrome knobs and push buttons on car radios with touch screens?  Lyle didn’t have a clue.

As for Dickens, that memorable first sentence was actually 119 words long, an entire paragraph, setting the stage for the novel’s contrasts.

5 thoughts on “Here’s a Sentence to Grab Your Attention”