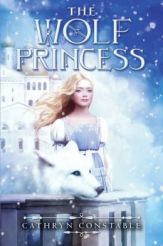 Sophie will steal your heart and will, forevermore, own a tiny piece of it. You’ll be fine with that. Think Annie; although Miss Sophie is as far from the spunky, spiral-curled red-head as a lonely, little phantom Russian girl, could be.

Under the perpetually gray skies of London, tucked into her tiny room with Delphine and Marianne, wrapped in her raggedy sweater, life was just fine for Sophie. With the Class Trip quickly approaching, the inevitability of being ripped from her “home” and ushered to her guardian’s, banished to silently haunt the shadows of the empty rooms, had Sophie slipping back to the dreams that both saved, and shattered her.

With no memory of her mother, only vague, distant memories of her cherished father, surrounded by snow, rushing her along to something….or maybe away from someone…..that part wouldn’t come; Sophie subsisted on dreams, fantasies woven around this tiny fragment of recollection. Possessing and nurturing such a vivid imagination, Sophie had little trouble accepting the bizarre Class Trip turn of events that would take her, along with both roommates, to Russia!

Admittedly less than eager, Delphine and Marianne weren’t so accepting. Quickly noticing a strange, yet familiar, woman watching them, the girls began to feel a bit nervous, particularly as their class mates seemed to be scattering away in tight cheerful groups. Those butterflies paled in comparison to later being unceremoniously, and quite literally, dumped into a snow-bank, with the pitch blackness of the night pressing down.

From here to a grand, albeit derelict, palace with a beautiful, intense and often confused princess, was perfectly acceptable to Sophie, Delphine could be placated by the grandeur of the still sparkling chandeliers and vastness of the rooms, while dependable Marianne felt fine so long as her pals felt fine.

The sense of foreboding, howling wolves, deliberate solitude and mounting, unanswered questions was soon to come. Even with hackles justly raised, the trio could never have prepared themselves for an adventure with jewel thieves, stolen identities, unfathomable choices made in seconds, many years ago, a family living underground to care for a mythical pack of wolves, or the consequences and rewards ingeniously, resourcefully hidden.

Ms. Constable has crafted an enchanting tale, filled with complicated, compassionate characters, both human and animal, all looking to solve the same mystery, for vastly different reasons. In spite of the icy princess, blustery snow and biting cold, this book will melt your heart.