In his freshman year at Columbia University, future journalist Asher Grey is forced to face his darkest demons when the world falls to pieces. A champion Tai Chi swordsman, he will be tested to his limits just to survive. With a heavy heart and swift hand, he must reach deep inside himself to discover what it means to be a Dragon.

Asher hasn’t seen his father in months, not since he left Chicago to go to college in New York. Then the world went to hell in a handbasket and his college days became just a memory. Classrooms and books have been replaced by starvation and bloodthirsty gangs and the only way he can stay alive is to keep moving from one hiding place to another. Maybe he should havce tried to walk to Chicago but what if his dad is coming to New York to find him?

Asher is a Night Crawler but he’s about to become a Lifer, fighting in the ring for the right to eat for one more day. The thing is, that might also mean giving up on who he really is.

Dragon Rising is a nice introduction to Asher Grey but also to a number of other characters we meet in the Eden’s Root Trilogy proper. There are a few pitfalls, primarily the lack of any backstory for how the world came to be in this condition. Because I’d already read (inhaled is more like it) the trilogy, I knew what Asher meant by the term “Foodmageddon” but a reader who’s new to the saga would have no idea. This is a novella that gives us the backstory of one character and it would be easy to mistake it as a prequel even though it’s labeled as #4; it is not a prequel in the usual sense and should be read after the first three books or, at the least, after Eden’s Root. Then you’ll just be adding to the pleasure you’ve already gotten  😉 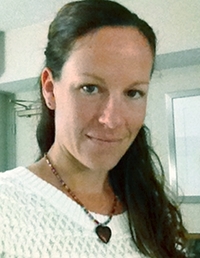 I am a wife and entrepreneur living and working in Florida. I am also a graduate of Mount Holyoke College, where I majored in Biology. It was always my assumption that I would end up making research my life. Though it did not work out that way in the end, my passion for Biology remains intact.

I have always loved biology-based science-fiction and the young adult genre. It is in this vein that I offer my work.