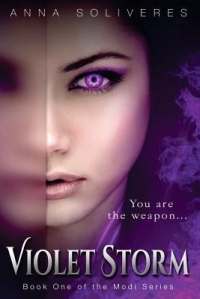 Several hundred years into the future, The Cleansing, known to some as the End of Days, forced the government to create Arks to shelter its people. When Earth became habitable again, new territories rose up from the ashes: Agria, the City of Light, and the Outer Boundaries. For a while, they lived in peace.

A brilliant surgeon known for his invention of Modi’s—the only cure for the deadly disease, vaincre—has gone rogue with his experiments, and the Monarchy is desperate to shut him down. That’s where Aeva Storm comes in, a champion athlete with an ego to match. Aeva is the surgeon’s secret weapon against the Monarchy. And they’ll never know what hit them. After reconstructing her body to become a Modi unlike any he’s ever created, Aeva is forced into a fight against all odds. She’ll have to break loyalties, hurt family, and turn her back on newly awakened love. Thousands of lives hang in the balance in a battle that will set forth a new era.

Join Aeva on her quest to see whether she’s got what it takes to go up against the most powerful humans ever created.

I make no secret of the fact that I love post-apocalyptic and dystopian fiction and I’ve read a lot of both genres, singly and combined. As time goes on, it becomes harder and harder to find something that’s truly fresh, more than a little different from what has come before.

That freshness can be found in Violet Storm, both in concept and in Aeva. I won’t go into much detail because it would be too easy to fall into spoilers but I was especially intrigued by Ms. Soliveres’ idea behind the plot. For one thing, we’ve seen other stories make use of the ark as a salvation for humanity—the movie 2012 is a good example—but the author goes a step further and shows us the societies that have arisen from the arks. The story takes place in what used to be the United States centuries earlier but there really are no significant elements of that prior civilization. The one obvious thing that has survived is class distinction based on level of power and wealth.

Aeva is an enigma, to the reader and to herself. From nearly the beginning of the tale, we know that Aeva is a strong athlete and that she doesn’t consider herself to be attractive because of the scars she’s gotten from playing the very rigorous Fila. What the reader and Aeva don’t know is what has happened since a dramatic lightning strike. Other people come into her life, particularly two young men named Karth and Ruven, but with each new meeting come more questions. As answers begin to come to light, Aeva must decide what is really important to her and especially whether she will get her revenge against those who have changed her world irrevocably.

On the whole, Violet Storm is really engaging but I did feel the first third of the book dragged somewhat. Because Aeva has lost her memory of the last month, the reader also doesn’t know what’s going on and it was a bit difficult to hang in there with her till the truth started to become clear. I recommend that any reader who’s beginning to fade away just hang in there a little longer—the wait is well worth it. In the meantime, I’m already looking forward to the next book, Crimson Earth.

Anna Soliveres has always been a storyteller but it wasn’t until her early twenties when she began writing novel length works. The result was an enthusiasm to get better at the craft until her work could be shared with the world. Releasing in March 2014, VIOLET STORM is her debut novel. Anna is currently working on another young adult sci-fi series, titled SNOW DOLLS, set to release in late 2014. To learn more, please visit her at www.annasoliveres.com.