In an effort to escape her past, vaudeville actress Leah Randall has changed her name to Jessie Beckett and moved from Oregon to Hollywood, California. Jessie lands a job as a script girl, a position that makes her responsible for the continuity of the silent film she’s working on. Her efficiency soon brings her to the attention of actor and producer Douglas Fairbanks, and his wife, Mary Pickford. Aspiring actress Myrna Loy is one of Jessie’s roommates.

These connections are all very well and should work in her favor. Not so well is that Jessie garners the special attention of Bruno Heilmann, head of the studio where she works. This attention brings her an invitation to one of Heilmann’s notorious parties, renowned for the booze, the drugs, and the sleeping around.

Jessie, accompanied by Myrna Loy, attends the party, furthering her friendship with Pickford and Fairbanks. She and Myrna leave the party early. On the way out, they witness a shouting match between two actresses known for being mistresses of Heilmann. When Heilmann turns up murdered the next day, everyone seems to be a suspect.

Unfortunately, that’s not the end of the murders. Heilmann is shot, a caterer’s assistant is clubbed to death, a woman is drowned,and another man is poisoned. All factor in, making detection of the murderer even more difficult. When it turns out dirty cops have stolen a load of drugs from Heilmann’s house, everything becomes even more complicated. And then, when David, a man Jessie knew as a drug lord back in Oregon turns up, she doesn’t know what to think.

I loved the atmosphere of this novel. Prohibition, the roaring twenties, silent films, old Hollywood and silent film stars. What’s not to like? The history seems spot on, and while the motivation of at least some of the murders may be a bit contrived, the characters and the setting and era make this a lovely read. I like Jessie very much. She’s a character who comes alive in my imagination. And now she has a choice between two men in her life. I think we’re supposed to root for David, but I don’t know. I find myself drawn to Carl. I’ll be waiting for the next installment.

Be careful what you wish for…

Lyra has always been ahead of the curve. Top of her class in school, a
budding astronomer, and with a best friend like Darren she barely has
time to miss the mother who abandoned her family years ago. She’s too
busy planning to follow in her father’s footsteps, and to become the
youngest astronomer at Space Exploration and Discovery.

When a star goes missing Lyra is determined to get to the bottom of it
only to discover her braniac dad is the mastermind of a top-secret government
experiment. They promise to build a perfect world, one galaxy at a time,
but with every tweak of the present, a bit more of the future starts to crumble.

Lyra has to go undercover to reveal the truth and let humanity decide if
the consequences are worth more than wishing on a star. 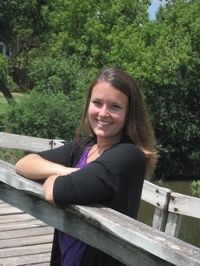 Eventually the day came when the voices in Kelley Lynn’s head were more insistent then her engineering professor’s. So instead of turning to her Thermodynamics book, Kelley brought up a blank page on her computer screen and wrote. Somewhere along the way she became a Young Adult author.

Kelley was born and raised a Midwestern girl. She’s not afraid to sweat and fills her free time with softball, soccer and volleyball. (Though you probably don’t want her on your volleyball team.) She occasionally makes guest appearances as a female vocalist for area bands. Music plays a large role in her writing process as well as the characters and plot lines within her stories.

You can find Kelley hanging out at her blog, titled in her name, as well as the group blog she shares with her fellow critique partners, Falling for Fiction. Kelley is a member of the Society of Children’s Books Writers and Illustrators.