A stylishly written thriller that tackles the
volatile relationship between high finance
and extreme weather events….

The Ark Storm is coming—a catastrophic weather event that will unleash
massive floods and wreak more damage on California than the feared “Big One.”
One man wants to profit from it. Another wants to harness it to wage jihad on
American soil. One woman stands in their way: Dr. Gwen Boudain,
a brave and brilliant meteorologist.

When Boudain notices that her climate readings are off the charts, she turns
to Gabriel Messenger for research funding. Messenger’s company is
working on a program that ionizes water molecules to bring rain on
command. Meanwhile, Wall Street suits notice that someone is placing six-month
bets on the prospect of an utter apocalypse and begin to investigate. Standing in
the shadows is journalist Dan Jacobsen, a former Navy SEAL. War hardened,
cynical, and handsome, Jacobsen is a man with his own hidden agenda.

It was the summer of 2010.  I was living in Dubai, and I had read that dramatically heavy rains were falling in the deserts of neighbouring El Ain in the United Arab Emirates.  The historical average number of rainfall events for June through September is two.  The National Weather Service forecasted zero rain events over that period.  But it did rain. On fifty-two separate occasions. And it hailed and galed and thundered.  It made the international news.

There were rumors of masts in the desert, of scientists and computer models, and it sounded like something out of a James Bond movie. And then I read an article which explained what had been going on.

It was the work of scientists.  Technicians were mounting ionizers on masts, producing electrons which attached to dust particles in the atmosphere. These dust particles rose by convection until they reached the right height for cloud formation where they attracted water molecules floating in the air. Those molecules then started to condense around them.  Billions of droplets of rain formed and fell….

So far, so Bondian.  Then I heard about the latest twist where the ionisers are sent up on drones, which made me think of terrorists, and I had myself a novel. It had all the things I love to write about—science, terrorism, financial shenanigans counterterrorism—and in the midst of it, a wonderful heroine. 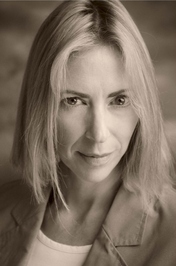 Linda Davies is a graduate in Politics, Philosophy, and Economics from Oxford University, and worked for seven years as an investment banker before escaping to write novels. Davies is married with three children. She lives by the sea in Suffolk, United Kingdom.

Linda lived in Peru for three years, and in the Middle East for eight years, during which time she had a rather unfortunate run in with Iranian government forces which resulted in her being held hostage for two weeks in Iran. After UK government intervention, she was freed.

Linda keeps reminding herself not to sweat the small stuff…

To enter the drawing for a hardcover copy of
Ark Storm by Linda Davies, leave a
comment below. The winning name will
be drawn Thursday evening, September 18th.
This drawing is open to residents of
the US and Canada.

“A plausible and stormy eco-thriller that might presage future
events…. an exciting and enjoyable book.”

“Ark Storm is a winner. It draws you in and thrashes you about like a
hurricane. It’s plausible and terrifying. The writing is crisp, the pacing
is breakneck, and the characters are vivid. I highly recommend it.”

“This vivid, exciting and original tale turns a very real superstorm possibility
into one of the most exciting stories I’ve read in a long time. I was going to
say that I got blown away by Ark Storm, but I’m afraid to! So I’ll say that I
got caught up in it, loved it and had wonderful time reading it!”