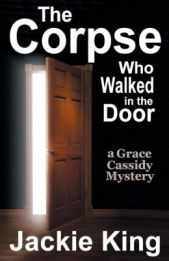 Former society wife Grace Cassidy is learning to live on the minimum wage she earns as a bed & breakfast inn-sitter. Grace finds her cat’s bloody paw prints leading away from a bathtub and wants to run for her life. But she can’t. Her 19-year-old son is accused of pushing his pregnant girlfriend down a flight of concrete steps and she won’t abandon him.

Grace is a woman who is way out of her comfort zone, thrown from married life to single status and having to make her own way in the world. That alone is enough to make her an interesting and appealing protagonist but she also happens to be very likeable, especially as she becomes more and more able to cope with her new circumstances.

Character development is at the heart of a good cozy and Ms. King doesn’t fail her readers. Besides Grace, there are any number of folks who reeled me in to the story, not least of which are her son, Brand, best friend Theodora and Grace’s delightful cat, Trouble. It’s nice that she still has her son close by since the two of them need to band together after having been deserted by Grace’s rat of a husband.

A solid mystery is the other strength of a good cozy and I confess to being puzzled by this one nearly to the end, something I always appreciate. I also found that it didn’t matter that I hadn’t read the first book in the series because Ms. King is adept at bringing the reader up to speed as much as is needed without creating info dumps.

As manager of a bed & breakfast, Grace is doing a credible job of morphing from society maven to regular working woman but hosting the inn owner’s family might be more than anyone should have to deal with, especially considering the hostility between the very unlikeable Wilbur and his long-lost twin. Still, it’s not one of them that becomes an almost-corpse or even her cad of an ex who wants her back or the nasty-tempered Uncle Jasper.

A well-constructed mystery and appealing characters make me want to read more of Grace’s adventures. Since I’ll have to wait a while for the third book, I guess I’ll have to go pick up the first one 😉 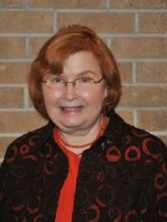 Jackie King loves books, writing tall tales, and murdering the people she dislikes on paper. Her latest mystery The Corpse Who Walked in the Door is available in print and ebook format. She is a member of Sisters in Crime, Mystery Writers of America, Romance Writers of America, Oklahoma Writers Federation, and Tulsa NightWriters.

Leave a comment below and
you might win a print OR ebook copy of
The Corpse Who Walked in the Door
by Jackie King!
The winning name will
be drawn on Sunday evening, September 14th,
and the book will be sent out at the end of
the tour. This drawing is open to
residents of the US. 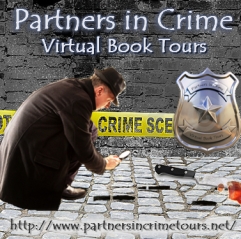 14 thoughts on “Book Review: The Corpse Who Walked in the Door by Jackie King—and a Giveaway!”