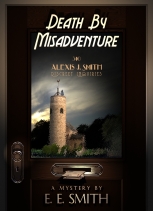 Alexis J. Smith has opened a detective agency in a time when it is very unusual for a woman to work at that occupation. Her office door reads “ALEXIS J. SMITH-Discreet Inquiries”. The last person Alexis expected to find in her office when she arrived at work was a former classmate, Kate Faraday.

Both women attended Sacramento High School, class of 1941 but Alexis fails to recognize her old classmate Katie O’Toole. Kate announces that she wants Alexis to find her husband Frank Faraday. It seems Frank has left Kate and according to the post card Kate shows Alexis he has taken their baby Daisy. The post card reads, “Daisy sends her love.” When Alexis asks what Kate would like her to do if she did take the job and if she did find Frank, Kate announces she wants him killed. Alexis has always had a soft place in her heart for Frank so she finally agrees to take the case and do nothing but report back to Kate if she finds Frank and Daisy.

After receiving a huge retainer from Kate, Alexis goes shopping, purchases an entire new wardrobe and arranges to travel to England to look for Frank. With the help of an investigator from Scotland Yard, Alexis manages to find the Old Vicarage where Frank is staying. The Vicarage is said to be haunted and Alexis has a very exciting time dodging the ghost while trying to figure out what is going on with Frank and Kate. Alexis is not finding a baby named Daisy.

This novel is a fast read with interesting characters that Alexis meets when she decides to stay at the old vicarage.